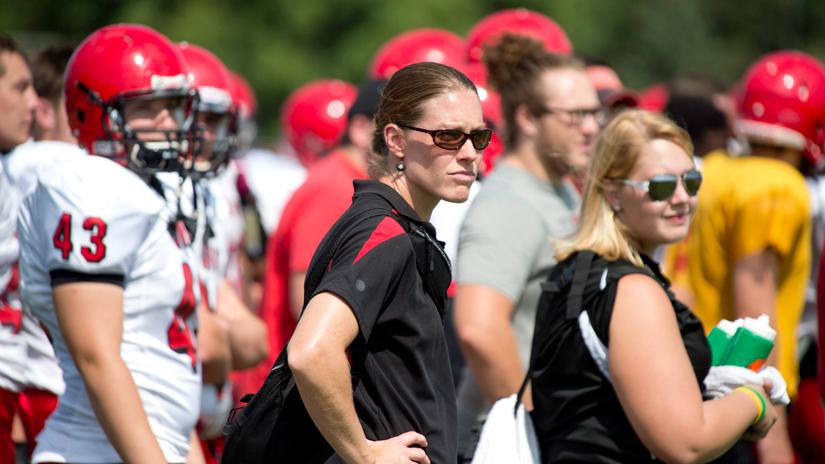 June 2, 2016 -- The University of Wisconsin-River Falls has named Crystal Lanning the new athletic director, serving in an interim capacity for the next two years. Lanning will start July 1, taking over the role from Roger Ternes, who recently announced his resignation effective June 30.

Lanning has been the assistant commissioner for membership services with the Northern Sun Intercollegiate Conference since July 1, 2015, but had previously worked with Falcon Athletics. She began at UW-River Falls in 2004 as an assistant athletic trainer and an instructor in the Health and Human Performance Department. In 2009, Lanning was named the department's senior women's administrator and assistant athletic director. She was named associate athletic director in 2014.

"We are pleased that Crystal has agreed to bring her talents back to the UW-River Falls Athletics Department, where she has already contributed so much," said Chancellor Dean Van Galen. "Her commitment to our student-athletes and her dedication to the UWRF mission were well known and she will have the advantage of already having strong relationships with staff and coaches. We look forward to welcoming her back to the Falcon family."

Lanning will bring with her critical experience regarding the NCAA and WIAC eligibility certifications, as well as promoting UWRF athletics externally, both to potential students and supporters in the community.

"I am truly honored to have the opportunity to return to UW-River Falls and to serve the Athletics Department in a leadership role," Lanning said. "UWRF is where I began my professional career and it is a special place for me and my family. I am looking forward to working again with the incredible staff within the Athletics Department and campus community to promote and develop Falcon athletics."

Lanning is a graduate of Winona State University with a degree in exercise science where she was a four-year letter-winning goalkeeper on a conference-winning soccer team. She received her master's degree from the University of Kentucky in kinesiology and health promotion, and is also a graduate of the NCAA/NACWAA Institute for Administrative Advancement.