March 3, 2015--Researchers in the Biology Department at the University of Wisconsin-River Falls recently received funding from the Wisconsin Department of Agriculture, Trade, and Consumer Protection to test a honey bee management strategy targeted towards maintaining and increasing the number of non-migratory Wisconsin beekeepers.

Wisconsin beekeepers produce almost 4.5 million pounds of honey with an estimated value of $9 million. However, honey production is only part of the benefit bees provide to the state.  Pollination services also play a critical role in supporting other Wisconsin crops including apples, cranberries, cherries, and strawberries.

The vast majority of Wisconsin's 900 honey producers run small, non-migratory beekeeping operations. These operators are facing significantly increased costs due to factors such as annual winter mortality losses of 30-50 percent, introduced diseases and pests such as the varroa mite and adequate nutritious native flower forage due to current monoculture farming practices. The annual replacement costs for those lost hives is making beekeeping unprofitable and ultimately unsustainable.

Over the next two years, researchers and students led by UW-River Falls biology professors Brad and Kim Mogen will evaluate the overwintering capabilities of small beehives called nucleus colonies or "nucs." Nucs can be produced in the summer by splitting existing hives, overwintered, and used as source material to replenish winter losses, thereby reducing the need to purchase new bee packages from southern states each spring. Not having to purchase bee packages produced in southern states will reduce costs and minimize the unintended introduction of undesirable genetic traits such as aggressiveness and southern pests. An additional benefit will be the ability to select for desirable traits at the regional level such as enhanced winter hardiness.

One of the most important aspects of this project is student involvement and training.  UW-River Falls offers a unique honeybee research course for freshman undergraduates. Students selected from that course will expand their training by working on the project throughout the summer where they will help collect hive data, learn bee management procedures, work with research collaborators from other departments and institutions and interact with Wisconsin growers such as cranberry producers.

The research project at UW-River Falls will begin this spring and extend over the next two winters. During the summer, nucs will be created that are headed by queens from five different genetic lines to test their overwintering abilities. Project results will be presented to regional honeybee clubs and to the Wisconsin Honey Producers Association.

Over the past three years, UW-River Falls has developed a significant collaborative research program involving undergraduate students with UW-Stout and the Bee Lab at the University of Minnesota. 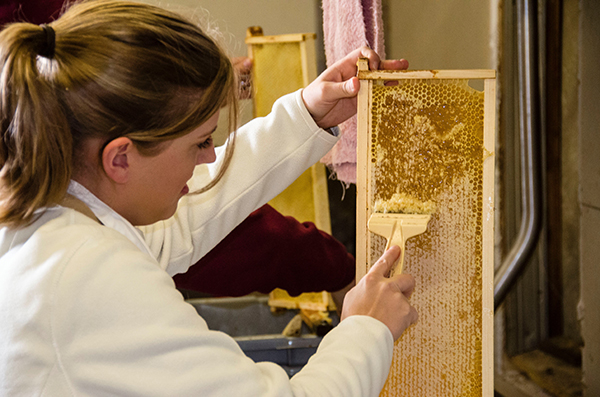