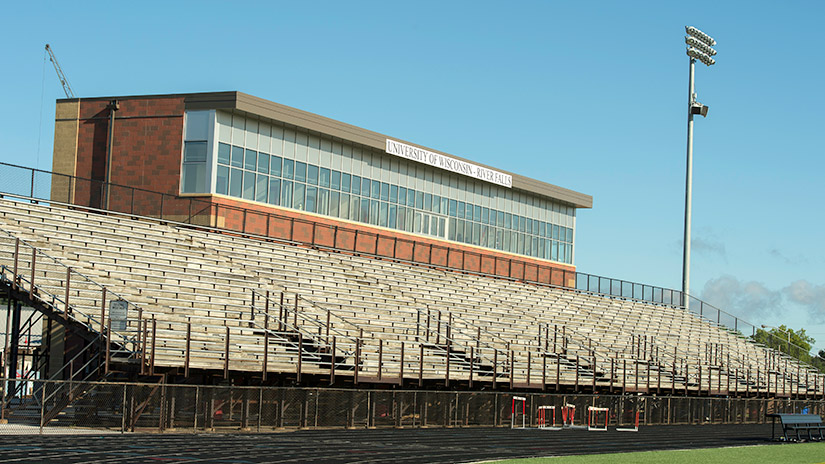 Public Invited to Rededication of Smith Stadium at Ramer Field

Sept. 3, 2015 -- After more than eight years of planning, fundraising and construction, David Smith Stadium at Ramer Field at the University of Wisconsin-River Falls will be officially rededicated on Saturday, Sept. 19. The public event will take place before the first Falcon home football game of the season.

Speakers for the event will include Chancellor Dean Van Galen, Student Senate President Chris Morgan, and members of the Smith family.

The $1.9 million renovation project included the installation of AstroTurf in 2014 and construction of a new press box and entrance plaza in 2015. The new press box has spaces for coaches, media, game operations, video and a hospitality suite. Ayres and Associates of Eau Claire was the lead architect along with Lien Peterson Architects of Eau Claire. The general contractor was Miron Construction of Neenah.

More than 250 donors supported the project that was fully funded by private gifts and student fees. The lead gift for the project was provided by the family of David Smith and First National Bank of River Falls where Smith was president and CEO until his death in 1994.

Fundraising efforts resulted in the naming of additional new spaces, including:

Champions Gate: in recognition of a fundraising effort led by the offensive line of the 1980s who won four straight conference championships.

Fran Polsfoot Gate: in recognition of contributions made during the original 2008 fund drive in memory of former Coach Fran Polsfoot.

Mike Farley Home Coaches Box: in recognition of Coach Farley and his many years of service to UWRF.

The donor plaza south of the press box includes engraved bricks recognizing those who made significant contributions to the project. Bricks may still be purchased by visiting www.uwrf.edu/giving.

“The rededication of David Smith Stadium at Ramer Field marks a new era in athletics in River Falls, both for the university and for the high school,” said Chris Mueller, assistant chancellor of University Advancement and president of the UWRF Foundation. “The experience for our players and fans is greatly enhanced by the new facility. While the patience of all involved was tested, in the end it really paid off.”

For more information, call University Advancement at 715-425-3505 or email events@uwrf.edu.