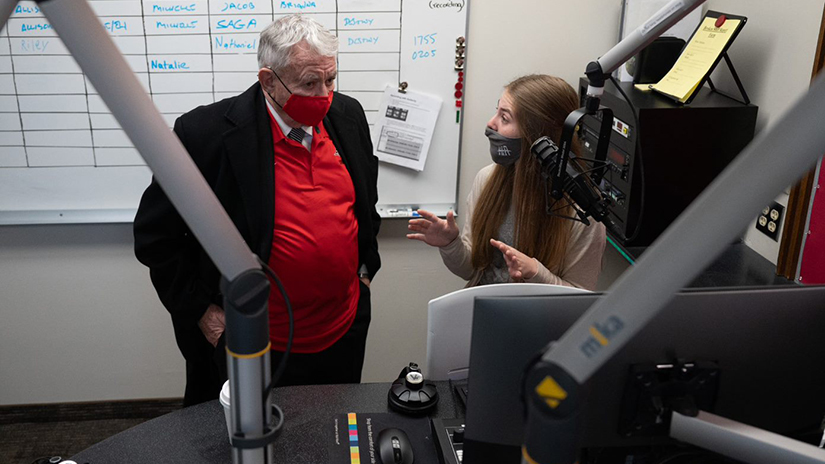 Stangler, an agriculture marketing communications and journalism major, is the recipient of the Donovan E. Rasmussen Broadcast Journalism Fellowship.

Through the fellowship, Stangler, of Watertown, will spend six weeks this summer reporting on local farm products that go directly to consumers, known as farm to fork, in western Wisconsin. Her work will be featured in a broadcast documentary.

The Donovan E. Rasmussen Broadcast Journalism Fellowship allows a journalism major to pursue a six-week summer reporting project. The goal is to produce a 30-minute audio documentary about a public affairs issue relevant to western Wisconsin. The student receives a $2,000 stipend, paid from an endowment funded by the late Donovan E. Rasmussen, a supporter of small-town radio, said Journalism Program Director Andris Straumanis.

Stangler hosts a radio show, “Sharing Positivity,” during the school year on the campus radio station WRFW-FM 88.7, a Wisconsin Public Radio affiliate. She started the radio show in the fall of 2020 to share positive music but has expanded it to include music and talk.

Earlier this year, Stangler was able to interview former Gov. Tommy Thompson for WRFW when he made his final visit to UWRF as the UW System president.

“When I am 80 years old, I want to have that much enthusiasm,” Stangler said. “It was such a good experience. I got to show him the station. He was interested in hearing how the station operates and how it helps students.”

Straumanis, an associate professor in the Communication and Media Studies department, said Stangler is a highly motivated student.

“Ms. Stangler clearly is committed to telling the story of agriculture,” he said. “She is involved in several organizations or projects, including serving as the program director for the student-run radio station, WRFW-FM.”

Stangler also helped promote the 10th Annual Ag Day this spring at UWRF as a member of the Collegiate Farm Bureau. More than 400 students attended the event in April to learn more about agriculture.

“We are all agriculture consumers,” Stangler said. “We all consume food or wear something. With the theme of ‘Let the Good Times Grow,’ we wanted to emphasize that.”

Stangler grew up on a small dairy farm in Watertown with about 50 milking cows. That piqued her interest in agriculture. She exhibited dairy at county fairs and eventually expanded into poultry and joined National FFA.

She was a broadcast news desk intern at last year’s National FFA Convention and plans to help in some capacity this October.

From 2019 to 2020 she was state FFA vice president and is still actively involved with the organization.

Stangler participated in Poultry Evaluation and Career Development. She started judging poultry in 2016 and enjoys learning more about the poultry industry.

She has already participated in two internships while at UWRF. She was a social media intern for GENEX Cooperative, a beef and dairy breeding company, this spring and spent summer 2021 as a Mid-West Farm Report intern, creating agriculture-related broadcast stories and social media articles.

Stangler is also a correspondent for the Wisconsin State Farmer newspaper as part of her goal to have more positive stories written about agriculture.

She chose UWRF because the university is well-known for its agricultural education. She recently graduated from the university’s Agricultural Business Leadership program and her goal is to graduate without any student debt. One key to her success so far has been to apply for scholarships.

“They are out there,” Stangler said. “Apply. Some will pay off.”