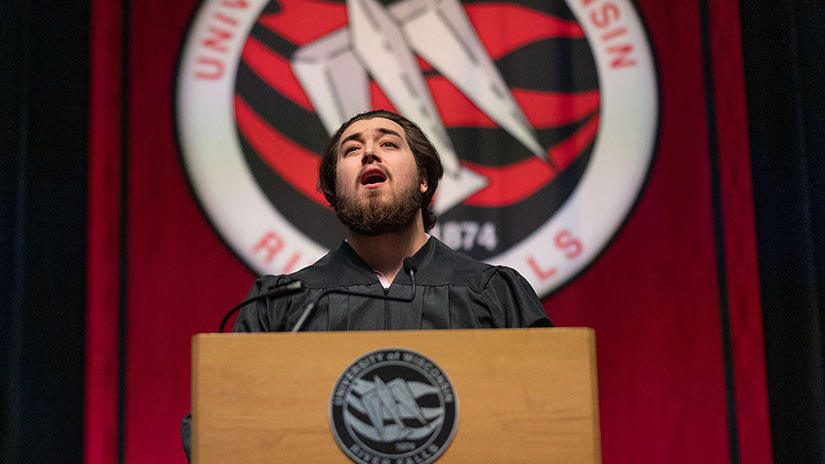 UW-River Falls graduate to sing opera this summer in Italy

He did not even realize an opera was all singing with no spoken lines.

Rivard, who graduated May 7 with a degree in music and composition and an emphasis in vocal performance, is headed to Italy this summer to sing in two operas for the Festival of International Opera Italia Summer Opera Festival. FIO’s mission is to discover future opera stars and provide young artists with a true international operatic experience, according to the Atlanta-based nonprofit group’s website.

“That sounds awesome,” Rivard recalled saying. “I auditioned with a recording and video footage. I will be flying out Tuesday, June 28, and starting on Saturday, July 2. There will be five weeks with four voice lessons a week and vocal coaching and Italian classes with an international language school.”

During the festival Rivard, a bass-baritone, will be in the supporting role of Antonio, the Count’s gardener, in Mozart’s opera “The Marriage of Figaro” and Puccini’s “Gianni Schicchi” as the doctor.

“This is just a great learning opportunity and that is what I am most excited about,” Rivard said. “It was just such a surprise. It really hasn’t sunk in yet. I have never been to Italy. I never planned to be an opera singer.”

Rivard will return to the U.S. in mid-August.

Sadeghpour, artist-in-residence at UWRF, said Rivard has been central to choirs and the music program while at the university.

“Zeb will have the opportunity to study in the birthplace of this art form,” Sadeghpour said of opera. “By far the best way to learn the Italian language is by being immersed in it. Young artists from around the U.S. and the world will be there and he will begin to build his professional network as well as continue to grow his musical and language skills. Zeb has a beautiful bass-baritone voice, which means he has great low notes and great high notes.”

Rivard, of Somerset, sang along with the radio as a child. He joined the choir in elementary school and continued to enjoy singing.

“I grew up listening to country music,” he noted.

When he started at UW-River Falls, he planned to major in psychology and criminology and pursue a career with the FBI, but after joining the UWRF Concert Choir and Chamber Singers, he knew his interest was music. Rivard switched to a music education major but eventually decided that his true passion is to teach college-level vocal performance.

At some point, he plans to attend graduate school to fulfill that dream and believes the festival will provide more experience.

“This is a great opportunity for Zeb, he will learn so much in a relatively short amount of time, and his new knowledge, experiences and relationships will help prepare him for his search for a graduate program in voice,” Sadeghpour said.

Rivard performed at both commencement ceremonies on May 7, singing the national anthem.

“It was great,” he said of performing at his own graduation ceremony. “It was definitely the largest crowd I have ever sang the national anthem to before.”