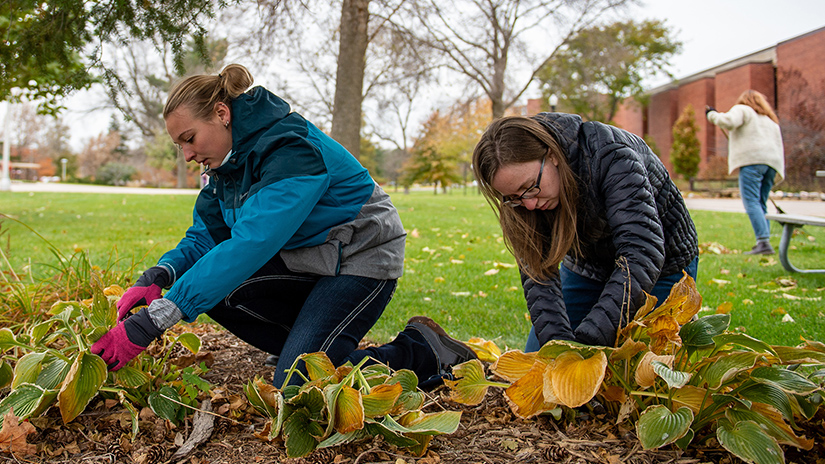 February 22, 2022 – With dedicated recycling and other campus-wide initiatives, the University of Wisconsin-River Falls is focused on reducing its carbon footprint and educating students about sustainability.

The university is taking part in the Campus Race to Zero Waste, formerly known as Recyclemania, that started in late January and continues until Saturday, March 26. The competition includes campuses across the U.S. and Canada.

The goal of the friendly competition among schools is to minimize waste on campus, encourage recycling and reduce the university’s carbon footprint.

On average UWRF’s recycling rate is about 30%, said Sustainability Coordinator Mark Klapatch-Mathias, noting there is room to improve that across campus.

In 2021 the university hit a record high of a near 56.5% landfill diversion, which includes recycling of batteries, scrap metal, electronics waste, appliances, light bulbs and pallets.

It also includes the surplus property program where office furniture and other equipment are reused by the university or sold if it can’t be repurposed on campus, Klapatch-Mathias said.

Money raised from surplus items sold in turn helps fund other waste minimization and diversion activities such as a battery recycling program on campus. In 2021, 819 pounds of dry cell batteries were recycled.

“It is a newer program that not a lot of campuses do,” Klapatch-Mathias said.

“I am sensing we saw less move-out waste at the end of the school year,” Klapatch-Mathias said, when asked about the change. “I think students came to campus with fewer things in 2021.”

The university also has plastic film recycling areas in Hagestad Hall and University Center. In 2021, just over 166 pounds of plastic film was recycled.

Being a part of the Campus Race to Zero Waste competition helps raise awareness about waste generation on campus, Klapatch-Mathias said.

“I think it is important to give the university a sense of not just what we are recycling but what we are generating and how we are disposing of it,” he said.

Weekly reports are gathered with waste and recycling materials weighed at the area solid waste station.

According to the Campus Race to Zero Waste website, over 1,100 colleges and universities across the U.S. and Canada have participated in the competition, recycling and composting 1,064 million pounds of waste and preventing the release of nearly 1.62 million metric tons of carbon dioxide equivalent, which is comparable to removing over 335,000 passenger vehicles from the road for one year.

During the 2020 competition, 4.5 million students and staff from 300 U.S. and Canadian campuses recycled and composted 48.6 million pounds, stopped 380 million plastics containers from going to the landfill, preventing the release of 70,875 metric tons of carbon dioxide into the atmosphere, which is equivalent to preventing the annual emissions from 15,047 cars.

UWRF has received national recognition for its sustainability efforts including:

For the future, Klapatch-Mathias said he believes the university can become a STARS platinum school, the first in the UW System and in the Midwest. There are currently only 11 universities with a platinum rating in the world.

“Our students want us to be more sustainable. They want us to be STARS platinum,” Klapatch-Mathias said. “We are a small enough school with a culture for sustainability.”

UWRF students do pay a segregated fee that is put into a Green Fund to support sustainability on campus.

The campus will have March Forth to Earth Day where every Friday starting March 4 there will be an event to support sustainability. The kick-off event will be at the University Center.

On Earth Day (Friday, April 22), there will be a march to Veteran’s Park and at 5 p.m. a Zoom event to link everyone marching for Earth Day around the world.

From 2 to 5 p.m. on Sunday, April 24, UWRF is a co-sponsor of Earth Fest 2022 at Glen Park in River Falls. The free event will have free LED bulbs, free trees for the first 500 attendees, music, food, activities, a sustainability pledge booth, well water nitrate testing and a clothing swap.

There also will be a Sustainability Fair with exhibits, demonstrations and advocacy.