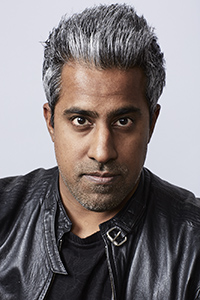 There will be an interview and Q&A session for the campus and community from 5:30 to 7 p.m. in 222 North Hall Auditorium. The event is open and free to all, and all are encouraged to attend a reception beginning at 4:45 p.m. outside the auditorium. Due to COVID-19 concerns, masks are required in university buildings.

Giridharadas will host a discussion for students from 2 to 3 p.m. in the Kinnickinnic River Theater, University Center.

“We’re thrilled to have Anand Giridharadas at UWRF for two events,” said Political Science Professor Neil Kraus. “His work has changed the debate about inequality in the United States, and we encourage the community to come to campus for what promises to be an important and engaging discussion."

The book investigates how the global elite’s efforts to change the world preserve the status quo and obscure their roles in causing the problems they later seek to solve.

“There is no denying that today’s elite may be among the most socially concerned elites in history,” Giridharadas wrote. “But it is also, by the cold logic of numbers, the most predatory in history.”

“Winners Take All” also addresses the disparity in wealth.

“The top 10 percent of humanity have come to hold 90 percent of the planet’s wealth,” he wrote. “It is no wonder that the American voting public—like other publics around the world—has turned more resentful and suspicious in recent years, embracing populist movements on the left and right, bringing socialism and nationalism into the center of political life in a way that once seemed unthinkable, and succumbing to all manner of conspiracy theory and fake news.”

A New York Times Book Review by Joseph E. Stiglitz called the book “entertaining and gripping. For those at the helm, the philanthropic plutocrats and aspiring ‘change agents’ who believe they are helping but are actually making things worse, it’s time for a reckoning with their role in this spiraling dilemma. I suggest they might want to read a copy of this book while in the Hamptons this summer.”

NPR’s Jessica Smith wrote Giridharadas “zeroes in on what he sees as a glaring hypocrisy among affluent elites: that while many well-meaning (and well-off) Americans claim to want to improve society’s inequalities, they don’t challenge the structures that preserve that inequality, not wanting to jeopardize their own privileged positions.”

Giridharadas is the author of the books “The True American” and “India Calling” and the newsletter The.Ink that investigates politics and culture, money and power and telling the truth. He was a foreign correspondent and columnist for The New York Times from 2005 to 2016 and has also written for The Atlantic, The New Yorker and The New Republic. He is a former McKinsey analyst, an Aspen Institute fellow, a visiting scholar at the Arthur L. Carter Journalism Institute at New York University. He appears regularly on TV and the radio in the United States and globally, including on CNN, MSNBC, NPR, Morning Joe and The Daily Show.

Born in Cleveland, Giridharadas was raised there, in Paris and Maryland. He was educated at the University of Michigan, Oxford and Harvard. He lives in Brooklyn, New York, with his wife, Priya Parker, and two children.

For more information on the speaker, visit www.prhspeakers.com/speaker/anand-giridharadas

The events are sponsored by the Walker D. and Helen Bryant Wyman Visiting Professorship which features prominent scholars speaking on timely topics. The professorship was established in 2015 with a generous gift from son, Dr. Bry Wyman.