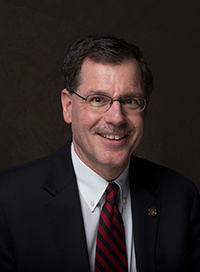 May 18, 2020 - In an email today to the University of Wisconsin-River Falls campus community, Chancellor Dean Van Galen announced his upcoming departure. Van Galen has been selected to serve as the 6th president of Missouri Southern State University, effective July 1.

“It has truly been an honor and privilege to serve as Chancellor of UW-River Falls over the past 11 years,” wrote Van Galen in his communication to UW-River Falls employees. “Most of all, our shared commitment has positively impacted the lives of so many students. I believe that this is the most important legacy that we will share.”

Van Galen has focused on a student-centered approach to his leadership while at UW-River Falls, supporting engagement in high-impact practices and emphasizing the importance of experiences outside of the classroom. He strongly advocated for undergraduate research and global education and engagement.

Van Galen also contributed significantly to the success of the university’s first comprehensive fundraising campaign, Rising to Distinction, with an emphasis on raising funds for student scholarships and the Falcon Center health and human performance facility. The campaign exceeded its $20 million goal, raising nearly $22 million.

In addition to developing strong alumni and donor relationships, Van Galen’s ability to forge strong partnerships with local and state government officials helped with attribution of millions of dollars in state capital investment for facilities which will position UW-River Falls to further contribute to the economic development of the thriving St. Croix Valley region and beyond.

During his tenure, Van Galen has helped UW-River Falls navigate through some difficult times of transition. As a result, he leaves the institution poised to continue facing challenges in a strong and principled manner, to ensure it will continue to impact the lives of students for generations to come.