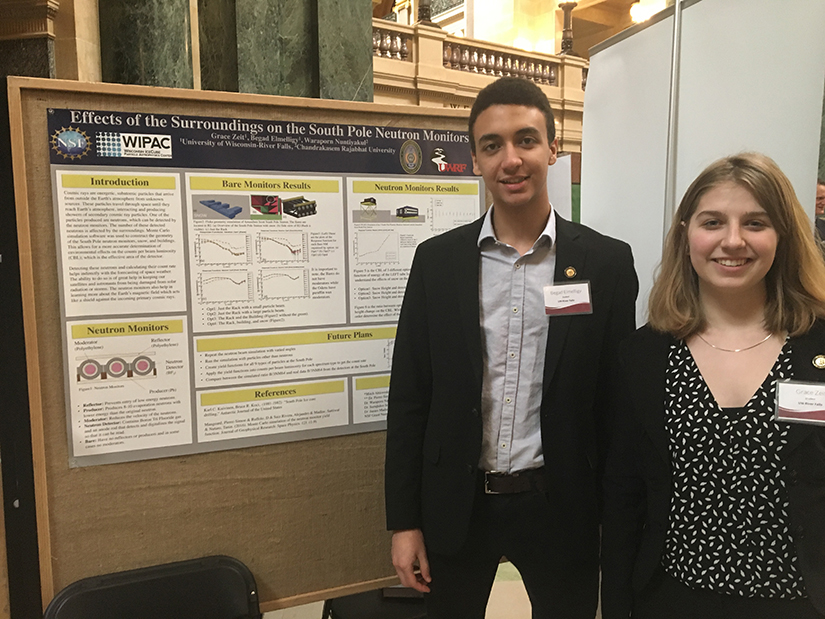 UW-River Falls students Begad Elmelligy and Grace Zeit presented their research at the 15th Annual Research in the Rotunda event in Madison April 11.

UW-River Falls students participate in Research in the Rotunda

April 13, 2018 - Nine University of Wisconsin-River Falls students shared their research on topics ranging from myoelectric partial hand prostheses to the effect of snow on the South Pole neutron monitorsat the 15th Annual Research in the Rotunda event in Madison April 11.

Nearly 130 students and faculty advisers from throughout the UW System took part in the event which allows legislators and the public to learn about the impact of UW System undergraduate research.

In addition to their presentations, the UWRF students and physics Professor James Madsen, who accompanied the group along with Director of Undergraduate Research, Scholarly and Creative Activity and English Professor Lissa Schneider-Rebozo, also met with legislators and staff to explain how research and “hands on” experience benefits them now and into the future. Madsen is a member of the AMANDA (Antarctic Muon and Neutrino Detector Array) and IceCube collaborations.

"I had the opportunity to attend this event and our students did an outstanding job of presenting their projects to legislators and others at the state capitol,” said UW-River Falls Chancellor Dean Van Galen. “Undergraduate research, across a range of disciplines, is a distinctive strength of our campus, and it is the dedicated mentorship of our faculty that is a key component of providing these opportunities for UWRF students.”

Each year, student research in Wisconsin leads to an average of 170 new patents, nearly one every other day.