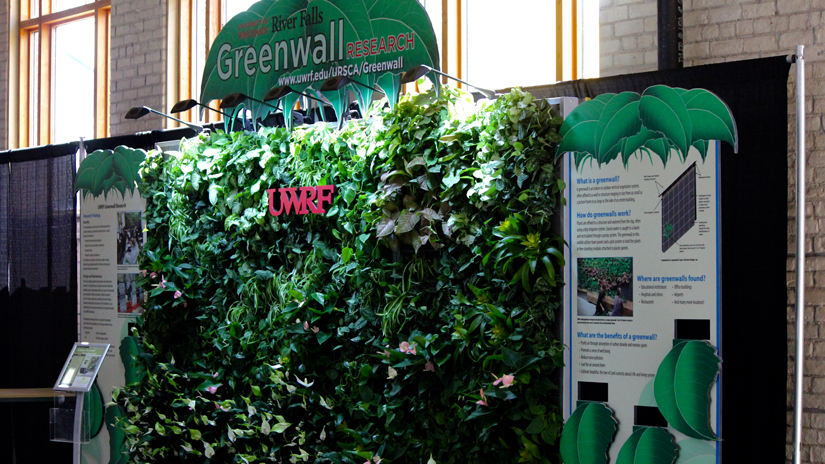 August 19, 2016 – The University of Wisconsin-River Falls will exhibit its greenwall research at the 2016 Minnesota State Fair, Aug. 25-Sept. 5. The exhibit will include giveaways, activities, and a full-size version of the foliage wall, or vertical vegetation system (greenwall), installed on campus in 2015 to study the effects of greenery and plants on student behavior, mood and classroom performance.

The greenwall research exhibit will be open each day of the Minnesota State Fair from 9 a.m. to 9 p.m. in the Eco-Experience Hall (Progress Center) and undergraduates will be on hand to answer questions. Prize drawings, giveaways, games, and a selfie station for visitors to post pictures using the hashtags #UWRFGreenwall and #EcoExperience16 will be offered at the exhibit.

Notable presentations on the Eco-Experience Sustainability Stage include "Attitudes & Academic Performance in a Greenwall Environment" by UW-River Falls undergraduate Alison Miotke with mentor Travis Tubre, psychology professor, on Sunday, Aug. 28, from 2-3 p.m. and "The Biology of Growing Vertical" by UW-River Falls undergraduate Mikayla Mack, with mentor Sonja Maki, lecturer in the Plant and Earth Science Department, on Friday, Sept. 2, from 10-11 a.m.

Younger children are invited to learn how to fold an origami leaf and discuss leaf biology with Maki and her student researchers on Monday, Aug. 29, from 10-11 a.m. or on Tuesday, Aug. 30, from 6-7 p.m.

A multidisciplinary team of UW-River Falls student and faculty researchers studied the benefits of a greenwall in a classroom setting over the 2014-15 academic year, including indicators such as workspace satisfaction, psychological restoration, academic self-efficacy, student worry, and mood. Results from the most recent greenwall research at UW-River Falls has confirmed the psychological benefits of living plants and provided preliminary evidence that plants may also improve academic performance.

Future research is dependent on funding, but may include expanding the study to examine the effects of the greenwall on other human subjects such as staff and professors. Ongoing research includes analyzing and testing the UWRF greenwall for optimal design features and upkeep protocols to maintain a healthy and sustainable greenwall system.

The exhibit shares the research findings of the greenwall installed in a classroom in the Agricultural Science building at UW-River Falls in January 2015. The classroom greenwall was largely funded by a grant from the National Foliage Foundation. The project also received support from Green Plants for Green Buildings, McCaren Designs, and the UW-River Falls Undergraduate Research, Scholarly and Creative Activity (URSCA) Office.

The greenwall research exhibit at the fair is made possible in part from generous donations from McCaren Designs, the DeLonais Foundation, the Minnesota State Fair Foundation, and the UW-River Falls URSCA Office.