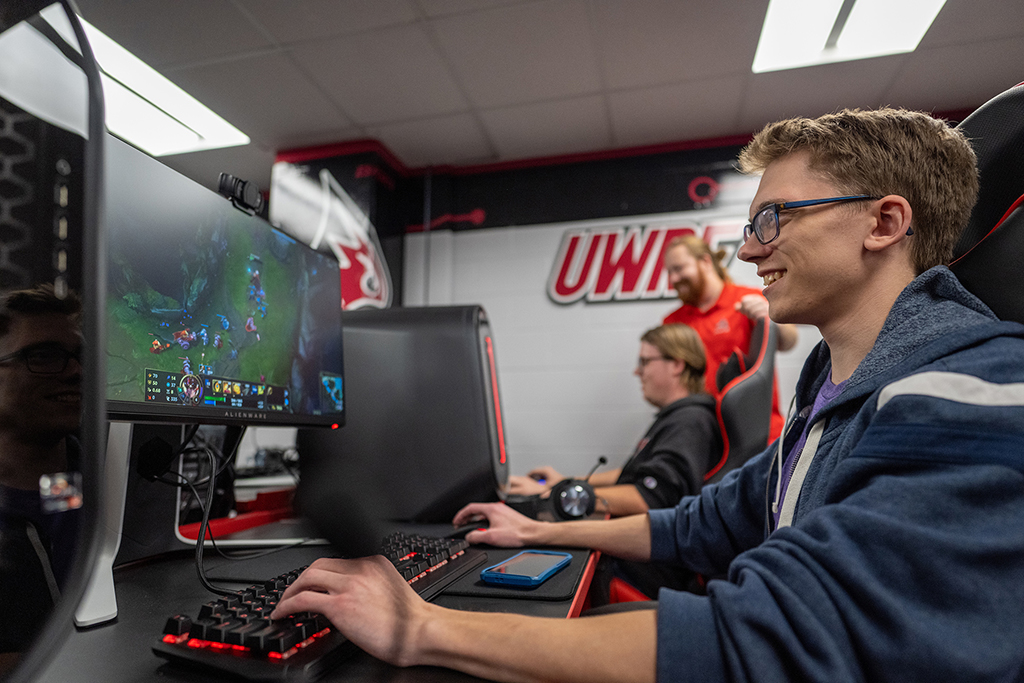 Jan. 11, 2023 -- Members of the University of Wisconsin-River Falls campus community now have access to a state-of-the-art arena for playing competitive video games, and the Athletic Department has a tremendous advantage in recruiting students when Esports becomes its 18th varsity sport in fall 2023.

Kellen Wells-Mangold, UWRF associate athletics director for compliance and student-athlete services, said he had become convinced that it was time to add Esports as a varsity sports program. The university already had a club Esports team, but elevating Esports to a varsity sport meant finding a permanent home for the team, much like the football team has Ramer Field and the basketball teams have the Don Page Arena.

Esports, also known as competitive gaming or electronic sports, has become popular with students on college campuses across the country. In the fall, UWRF will become the second WIAC member school to add Esports as a varsity sport, following UW-Stout. UWRF officials said, however, that each WIAC campus has Esports in some capacity. Furthermore, at least 170 institutions across the nation have varsity Esports programming.

Esports athletes, Wells-Mangold said, “are held to the same standards that everyone else is,” and that meant the university had to find a space for the athletes to train and play.

“When you think about equity, having a dedicated space would be consistent with what we do for other teams, so why not do it for them (Esports athletes),” Wells-Mangold said.

After much discussion on campus and a lot of research, a 26-seat facility with powerful computers and monitors opened in the fall on the first floor of the Chalmer Davee Library. It is used by students, faculty and staff, and the Esports club now, but in the fall will also become home to the Falcon varsity Esports team.

“It means everything,” Wells-Mangold said of the new facility. “We needed to make a space unique to our campus with the best equipment for students to compete on. That’s what it takes to attract the best student-athlete.”

Wells-Mangold said he and others hoped that adding a new Esports facility on campus would help attract the right coach to lead the new team, and they believe that Dylan Gentilcore fits the bill.

Having top-notch facilities “makes a world of difference to these players,” Gentilcore said of the type of student-athletes he is recruiting. “They are going to feel taken care of and have an amazing experience.”

Gentilcore said recruiting is going extremely well and he can’t wait for the season to start.

“I’m bringing people in from all over the country to play here,” Gentilcore said, adding his goal is to have an initial roster of 30 men and women. He said a roster of double or triple that is possible, “if I get the results I want from my players.”

Gentilcore added: “What this (Esports arena) does is, it allows you to come in and focus on what you do best. All the other drama doesn’t come into play when we provide this kind of equipment to play on.”

Another facet of Esports is that men and women compete on the same team.

“It’s very inclusive,” Gentilcore said. “Esports does not discriminate on any basis.”

The arena will remain open to students who are not on the Esports varsity team, including those on the club team. Campus recreation also offers opportunities for both students and staff and faculty to use the space with a membership, similar to how people can use the Falcon Center.

“It’s great to be able to play with teammates here,” said Esports club member Jaiden Trettin about the arena. “It’s a place where we can stay more interconnected, and it can help draw more people in.”

Noah Peick, a sophomore from Lonsdale, Minn., said he was impressed by the technology installed in the arena: AMD Ryzen 7 5800 computers and Nvidia RTX 3080 graphic cards.

Trettin, a sophomore from Kaukauna, also said the arena and adding Esports as a varsity sport will have benefits for UWRF as well: “It’s a good way for us to get known,” she said, “and it is helping us branch out more.”

Gentilcore will be at the Minnesota Varsity League (MNVL) Finals representing UWRF as an official sponsor of the event January 13-15 at the Wisdom venue in the Mall of America.