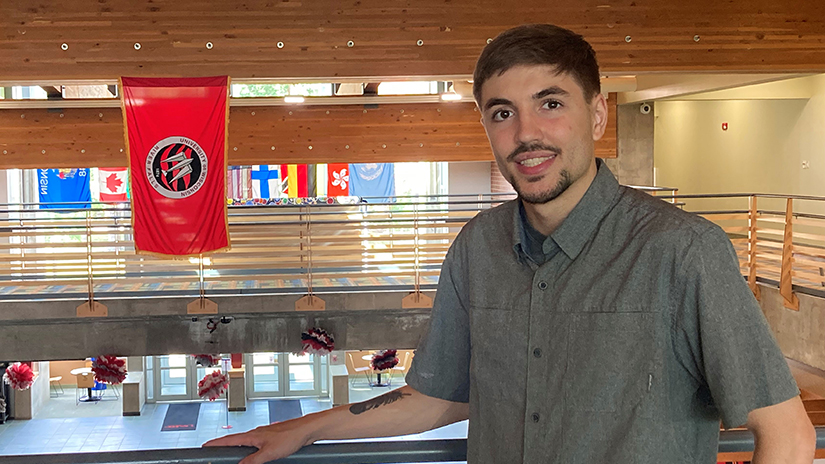 Results were announced at a June 24 ceremony in Madison.

Isabella Forliti, a 2022 graduate in communication studies who was editor during the spring semester, took second with her October 2021 story “Governor visits campus for vaccine discussion” and third place for “UWRF adjusts COVID policies,” which was published in September 2021. On the latter story, a contest judge commented, “Solid work on the topic of the day.”

Brooke Shepherd, a December 2021 journalism and animal science graduate and a former editor of the Student Voice, won first place in the special coronavirus coverage category for “Pandemic increases bias toward Asian Americans,” which was published in April 2021.

“Very professionally written coverage of an aspect of the pandemic we hear so much about, but don’t hear many speak out on,” a contest judge commented. “Listening to a college student’s fears about discrimination and hate crimes was eye-opening.”

Shepherd also earned an honorable mention in the feature story category for “Team presents research on teaching about race relations.” The story was published in October 2021.

The Student Voice also earned two awards in its division for the newspaper’s staff-written editorials. The October 2021 editorial “Further recognition from UWRF needed for Indigenous communities” won second place. “It’s safe to return to campus, but students should have options,” published in April 2021, received an honorable mention.

Andris Straumanis, Student Voice faculty adviser and program director for the journalism program, said he was pleased with the students’ achievements.

“I'm pleased that we have a good group of students who remain committed to producing a campus newspaper,” said Straumanis, an associate professor in the Communication and Media Studies Department. “These awards are a testament to that dedication.”

Schindler Van Hoof, a sophomore majoring in English with a creative writing emphasis, said he was pleased to garner a first-place award.

“I never expected it because I was new to journalism in general,” he said. “It was very exciting to hear the news.”

Schindler Van Hoof will co-edit the newspaper in the fall with Lexi Janzer, a junior journalism and criminology major from Mayville. Schindler Van Hoof expects the Student Voice will continue on its same path.

“Everyone at the Student Voice has a lot of freedom in how they approach an article,” he said. “I’m looking to keep that same style.”

Judges evaluated a total of 262 entries from 11 campus newspapers across 20 categories.

The WNAF Collegiate Better Newspaper Contest recognizes excellence in student journalism across the state. It is open to all active campus newspapers covering Wisconsin public and private college and university campuses.

Entries are judged by leaders in the newspaper industry and receive personalized, detailed feedback and suggestions from the judges.

The Student Voice is a student-run campus media organization supported primarily by student fees. Founded in 1916, it produces a monthly print edition and maintains a website, uwrfvoice.com.