On a clear moonless night in the middle of winter, all is not quite what it seems. Nine stories of romance take place on a single night in the remote mythical town of Almost, Maine. Cariani gives us a glimpse of what the people are like in a small-town in northern New England. He draws from his experiences growing up in Presque Isle, Maine, where the people are known to be honest and true, not cynical, and smart. They wonder about things. As the northern lights hover in the star-filled sky, Almost’s residents find themselves falling in and out of love in unexpected and often hilarious ways.

Tickets are $10 for adults, $8 for seniors (60+) and $5 for UWRF students with ID and children (12 and under). Some age appropriate material is implied. The University Theatre Box Office, located in the Kleinpell Fine Arts building, will be open Monday through Friday beginning Feb. 13 from 10 a.m. to 3 p.m. Tickets can be purchased in person or by phone during the daytime hours. Tickets for remaining seats can be purchased at the Box Office window starting at 6:30 p.m. on the nights of the performances.

For more information or to order tickets by phone, call the Box Office at 715-425-3114.  Additional information and a mail-in order form can be found at http://www.uwrf.edu/CSTA/UniversityTheatre.cfm. 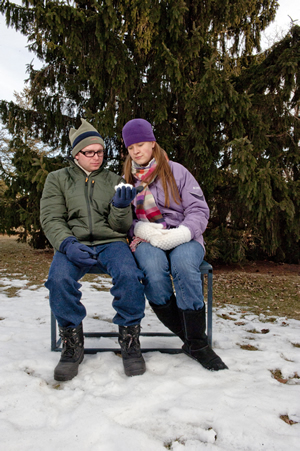 Photo cutline:  Senior Zach Svoboda as "Pete," left, and Junior Heide Dudley as "Ginette" portray one of the nine stories of romance that take place on a single night in the remote mythical town of Almost, Maine, in the UWRF University Theatre’s production of “Almost, Maine,” a romantic comedy on Feb. 23-25, 28, 29, and March 1-3.