March 27, 2015—The University of Wisconsin-River Falls academic quadrathlon team took first place in the written component and fourth place overall in the Academic Quadrathlon held in conjunction with the Midwest Sectional Meeting of the American Society of Animal Science March 16-18 in Des Moines.

Fourteen schools from the Midwest region, which includes 12 states and Canada, competed in the event.

The competition is designed for teams consisting of four members and involves four individual components: a written exam, a laboratory practicum, an oral presentation and a quiz bowl. Each activity is performed by the team as a whole and covers content in all disciplines of animal science such as nutrition, genetics, breeding, physiology, animal welfare, animal management and animal product technology.

The UW-River Falls team overcame a significant handicap, competing with only three team members because one of the members was ill. The team members, all seniors, were Jessica Gaska of Columbus, Erin Sorge of Baraboo, and Jessica Stuttgen of Colby. Gaska has been accepted into the UW School of Veterinary Medicine for fall 2015. Sorge is pursuing a graduate position in dairy nutrition at UW-Madison. 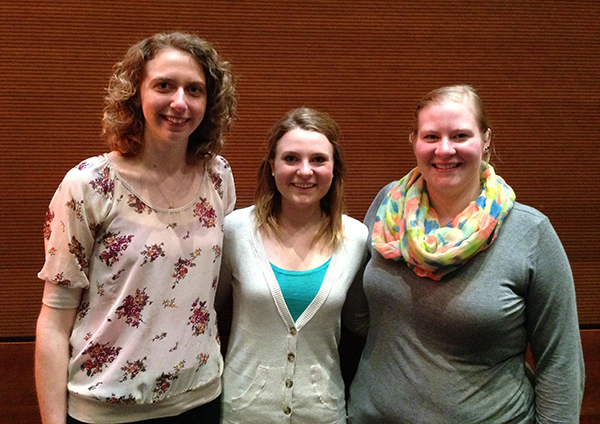