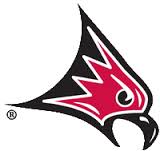 October 12, 2015--Nine individuals and one team were inducted into the UW-River Falls Athletic Hall of Fame Friday evening as part of the annual UWRF Homecoming festivities. A large crowd was on hand for the ceremony as inductees spoke fondly of their UWRF experiences. Honorees were also presented at halftime of the Homecoming football game and participated in the annual Homecoming parade on Saturday.

In front of a crowd of more than 200, new Hall of Fame inductees took to the podium to thank the families, coaches, and fellow teammates that contributed to their success. Each honoree spoke of their UWRF experiences, with many connecting past athletic achievements with current accomplishments.

“My experience as a student-athlete at UWRF taught me that I have to work hard every single day to accomplish my goals. I learned in my time here that you can never let up if you are going to achieve something great, you have to give it your all at all times. Those lessons have served me well since I left UWRF,” said Brady Alstead, former men’s hockey All-American and 2015 Hall of Fame inductee.

In addition to highlighting their lessons learned and thanking family and friends, each of the inductees praised UWRF and their collegiate experience. “I would choose UWRF again in a heartbeat. I would absolutely choose to come to this place again if I had to redo it. My experience was second to none,” said Mandy Stokes, former women’s hockey player and the only four-time captain in UWRF women’s hockey history.

The UW-River Falls Athletic Hall of Fame Class of 2015:

Rick Bowen (coach and administrator): Bowen spent 20 years as head men’s basketball, amassing 265 career wins (all-time leader in UWRF history). He earned WIAC Coach of the Year and NABC West Region Coach of the Year honors in 2004 in addition to being selected to the WBCA Hall of Fame in 2009. He also served as UWRF athletic director from 2002-2010.

Connie Foster (gymnastics coach and administrator): Foster served as gymnastics coach from 1984-1992 and was the WIAC Gymnastics Coach of the Year in 1989. She served UWRF in many facets, including women’s athletic director (1992-96), athletic director (1996-2002), Dean of the College of Education and Professional Studies (2003-07), and Interim Chancellor (2008-09). She served as co-chair of the Falcon Center Fundraising Committee and as president of Wisconsin Women’s Intercollegiate Athletic Conference (1995-97).

Melissa (Tvrdik) Kossoris (volleyball): Kossoris earned four letters in volleyball and was the WIAC Player of the Year and Scholar-Athlete in 2003. She was a COSIDA Academic All-American and earned AVCA All-Midwest Region honors in 2002 and 2003. She was named to three All-WIAC teams (2001, ’02, ’03) and ranks in the top ten in UWRF volleyball history for career kills (1209), career kill percentage (.321), and career block assists (337).

Amy (Brooke) Shafer (softball): Shafer lettered four times for the UWRF softball team (2000-03) and was the WIAC Scholar-Athlete in 2003. She was a four-time National Fastpitch Coaches Association Scholar Athlete (2000-03) and was the team MVP in 2003. She still ranks in the top three in the UWRF record books for career ERA (1.78), complete games (50), and career innings pitched (512.1).

Mandy Stokes (women’s hockey): Stokes, whom the women’s hockey team’s hardest worker award is named in honor of, was a four-time letter winner (2000-03) and only four-time team captain in school history. She was an All-NCHA First Team selection in 2001 and a NCHA All-Academic honoree in 2001, ’02, and ’03.

1988 Men’s Hockey Team: The 1988 men’s hockey team won UWRF’s first ever NCAA title. The team won the NCHA regular season and playoff championships under Coach Rick Kozubach. In the NCAA playoffs, UWRF defeated UW-Stevens Point in the quarterfinal series, 6-5, 9-5, and then defeated Bemidji State in the semifinal series, 6-4, 5-3. The Falcons then conquered Elmira, N.Y. on Elmira’s home ice, 7-1, 3-5, 3-0 (mini-game) to win the NCAA Championship. The team set a single season record with 31 wins.