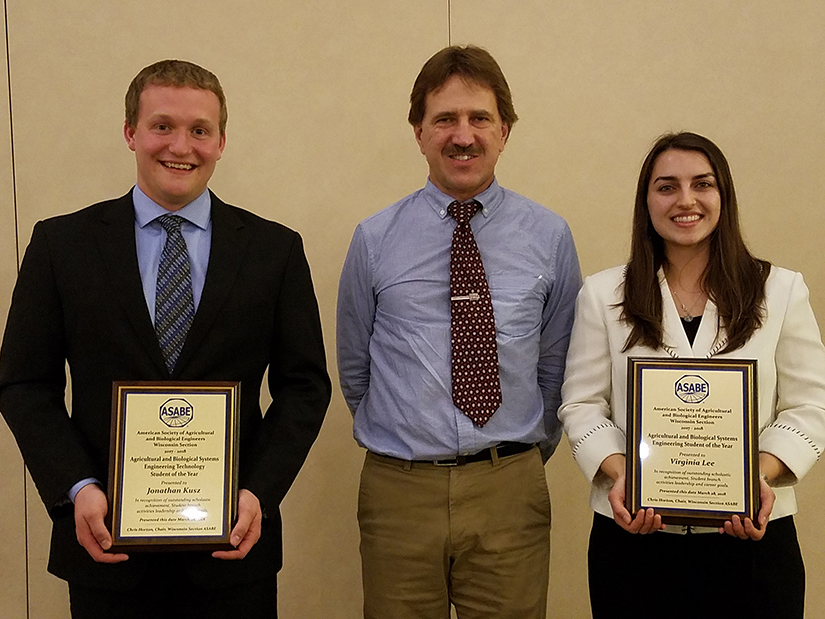 April 9, 2018 - Two University of Wisconsin-River Falls students were honored by the Wisconsin chapter of the American Society of Agricultural and Biological Engineers at their March 28 meeting in Oshkosh.

Sophomore Virginia Lee of Mequon received the Agricultural Engineering Student of the Year award. The agricultural engineering program is one of the newest programs at UW-River Falls. Lee was among the first students accepted into the program in 2016 and is the first UW-River Falls student to receive this award. Lee’s career path was sparked by a high school service trip to Ecuador. She wants to use her agricultural engineering degree to help reduce poverty by removing deficiencies and inefficiencies in getting food, water and other critical resources to communities.

Lee is taking advantage of the many opportunities offered on campus. She is employed in the Dairy Pilot Plant on campus and is a member of the Dairy Club, the Newman Club, and the Falcon Pulling Team, which is designing and fabricating a quarter-scale tractor for the ASABE intercollegiate competition in June. During her spring break in 2017 she participated in a Habitat for Humanity project in Jefferson City, Mo. Despite being very engaged in activities outside of classes, Lee still excels academically. She is a Falcon Scholar, enrolled in the Honors Program on campus and has made the Dean’s List each semester. Lee will be interning this summer as a dairy process engineer with GEA North America.

"I feel so honored to receive this award,” said Lee. “While the spotlight has been placed on me, I represent a group of hardworking, intelligent students in the inaugural agricultural engineering class at UWRF, who constantly push me to do my best. It was also very fitting that I received the award during Holy Week, as my faith is a huge part of what gets me through the hardest school weeks.”

Jon Kusz, a senior from Stillwater, Minn., was the recipient of the Agricultural Engineering Technology Student of the Year award. Kusz is the president of the Falcon Pulling Team, overseeing 20 active members as they prepare for the June competition. He has also been involved in volleyball intramurals, served as president of his Residence Hall Council, and vice-president of the Agricultural Industries Club, which organizes various career development field trips and a pond clean up in the local community. Much like Lee, Kusz has been impacted by an international experience as he participated in a study abroad program during his sophomore year.

"Visiting sites such as Auschwitz changed my perspective. The way I view a typical American problem like losing my cell phone has changed,” said Kusz. “I also learned that the world views American culture very differently and that will help me as I enter the industry.”

Kusz is currently job hunting, hoping to secure a position as a manufacturing engineer. In the future he hopes to start a company with a focus on increasing sustainability and helping ensure that fresh water and secure food sources are available to everyone.