Students named in each college for highest GPA

May 23, 2022 – Four students earned the Rochelle Junkman Seymour Award for having the highest grade point average (GPA) in their respective colleges at University of Wisconsin-River Falls.

The students were given a stole to wear during commencement ceremonies on May 7.

College of Business and Economics

Lauren White, a business administration management graduate, earned the award for the College of Business and Economics. White, of Elk River, Minn., had a 3.97 GPA. 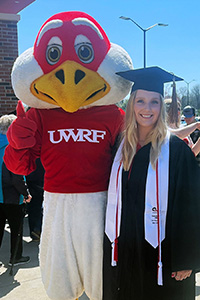 White started at UWRF as a junior after earning her associate of arts degree while at Spectrum High School. She started taking college courses in 10th grade and garnered 60 college credits before she graduated high school. Her high school focused on college preparation and worked with Anoka-Ramsey Community College.

“It was definitely strange when I moved into college and was living with those my same age and having to explain we would not be in the same classes,” White said.

Because of the COVID-19 pandemic, White had most of her classes online.

“Probably most of the people I graduated with have no idea who I am,” she added. “Most have been here four years and got to do their first- and second-year in person.”

Sometimes White wishes she could attend UWRF longer but is grateful she got her associate degree while in high school.

“It saved me from paying for two years of college,” she noted. “I’m also graduating at age 20 with a full-time job. It was such a great opportunity. My high school was challenging but supportive. It helped me get prepared for college.”

White started May 16 as a business operations coordinator for Open Systems International in Medina, Minn.

White chose UWRF because it was close to home and accepted all her credits. She was proud to receive the award for her GPA.

Eventually, White hopes to earn her master’s degree while continuing to work.

College of Education and Professional Studies

Mary Bronk, who graduated with a degree in elementary education, garnered the award in the College of Education and Professional Studies. 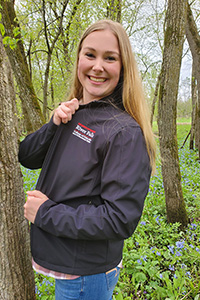 “I am honored to have received this award because it recognizes the hard work and dedication to my academic performance that I put in throughout all four years at UWRF,” she said. “It wasn’t easy balancing many different commitments on campus, but my classes and studies always came first.”

Bronk is in Thessaloniki, Greece, student teaching abroad through the Consortium for Overseas Student Teaching Program. UWRF is one of 16 universities across the U.S. that are part of the program that sends teacher candidates overseas for a two- to three-month placement in an international classroom.

College of Arts and Sciences

Eryn Keenan, a dual major in psychology and communication studies, earned the award for the College of Arts and Sciences. Keenan had a 4.0 GPA. 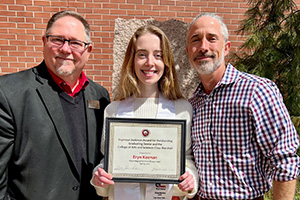 “I was not expecting it,” she said. “I am internally motivated. Getting the award, for me, was just a bonus. It was nice to have the acknowledgment and recognition for my hard work.”

Keenan earned her associate degree at Normandale Community College in Bloomington, Minn., before transferring to UWRF because all her credits were accepted.

“I walked the campus one summer day and I could see myself here for the next couple of years,” Keenan said.

Now that she has graduated, Keenan plans to travel for the summer and then look for a career in human resources. Eventually she would consider returning to school for a master’s degree.

Last year all of Keenan’s classes were online because of the COVID-19 pandemic. Her senior year was the first year she was able to be on campus for classes.

“This year I was able to meet a lot of people and make some great friendships,” she added.

Keenan, of Minneapolis, is thankful for her family and friends who provided emotional support while she was in college. 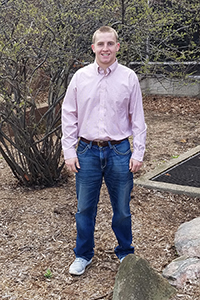 The award in CAFES went to Curtis Weltzien of Arcadia, an agricultural business graduate. Not only was Weltzien the leader in terms of his GPA but he is also the all-time intramural wins leader at UWRF, having just passed 500 career wins. He has a love for competition and put in the extra effort needed to find a win.

A friend summed Weltzien up by saying, “Curtis is going to give his all, make you laugh along the way, and stick to honesty and integrity better than super glue.”

Weltzien is returning to his family’s dairy operation.