First awarded in 1980, the Chancellor's Award is presented annually to a small group of juniors and seniors for distinguished leadership and service to the campus and external communities during the course of their time at UW-River Falls.

During the ceremony, UWRF Chancellor Dean Van Galen congratulated the recipients and challenged them to continue their commitment to service.

"I encourage you to exert your strength by pulling others up," Van Galen said. "To lead—as servant leaders, placing those you lead above yourself."

Abda, a senior sociology major, served as president of the Black Student Union where he planned and led numerous annual events including African Night and the Soul Food Dinner. He served as the emcee of the American Multicultural Student Leadership Conference and is the Regional and Chapter Core Leader for Students Today Leaders Forever, organizing service trips for hundreds of students at locations throughout the United States. This includes arranging lodging and meals, facilitating workshops, collecting donations, and building relationships with numerous non-profit organizations.

Abda's commitment to service extends off campus where he has served as an intern for Turningpoint, the Dakota County Juvenile Services Center, and volunteered 300 hours to the River Falls Food Pantry. He has previously been honored with the Outstanding Service Award from Students Today Leaders Forever, the Martin Luther King, Jr. Emerging Leader Award, and the Presidential Service Award from AmeriCorps.

"Anwar is not only an ideal candidate for the Chancellor's Award, but I have the utmost confidence he will continue to serve as an excellent ambassador of the university as he is the very embodiment of the ideals this institution strives to promote in its students," wrote Paige Miller, assistant professor of sociology, in her letter of support.

Cavalheiro, a junior majoring in crop and soil science, is fluent in English, Portuguese, and Spanish. He was ready to meet UWRF's international students at the airport, help them transition to life on campus, and assist them in completing paperwork such as opening bank accounts, and insurance and immigration forms. As President of the Chancellor's Student Ambassadors and a member of the UW-River Falls Foundation Board of Directors, he excels at engaging faculty, staff, alumni, and community partners.

Cavalheiro's on-campus accomplishments are made all the more remarkable by the fact that he owns his own business. After four years working as a farm hand and truck driver in Wisconsin and Oklahoma, Gustavo purchased two trucks and one trailer and is a partner in Kayto Trucking, a company that transports water, hay, and livestock.

"Mr. Cavalheiro has leadership skills and a personality that transcends cultures, languages, ages, and groups of people. He is a genuine leader and a hard-working student. He is truly grateful to be earning his degree at UWRF. I feel fortunate that he has chosen us," said Rhonda Petree, director of the UWRF English Language Transition program, in her nomination letter.

With fluency in both English and Chinese, LiYuan frequently acts as an interpreter for the Chancellor's Office when business between Chinese speaking constituents and UWRF occurs. She has served as a student outreach assistant in the Global Connections Office and acted as a liaison between Chinese educational institutions and UWRF when agreements and collaborations are being discussed. She has also assisted a Chinese professor at UWRF as a teaching assistant.

LiYuan's holds leadership positions with the Chancellor's Student Ambassadors and the Accounting Society. She has volunteered her time with Feed My Starving Children and helped low-income families file their tax returns.

"While her contributions in class and the broader university community are considerable, LiYuan's personal qualities are what truly set her apart. In the three years that I've known her, I've seen how her optimistic spirit, focused determination, and ethical fortitude positively guide her interactions with others and the choices she makes," said Grace Coggio, assistant professor of communication studies in her letter of support.

Hanson, a senior applied physics and bioproducts major, has served as president of the Society of Physics Students and has led a delegation of UWRF physics students to an international conference for undergraduates, and, for the past three years, has led UWRF's delegation to the University of Nebraska's Women in Science meeting.

Hanson is a leader in UWRF's science outreach activities such as the Haunted Lab and visits to area schools, and has served as an event supervisor at many local and state Science Olympiad tournaments. In January, she led a group of UWRF students in an evening of hands-on spectroscopy at a Women in STEM event at an area middle school, reaching more than 100 young women. She is also a technical aid at 3M and a physics tutor on campus.

"Katrina is the epitome of the ideal UWRF student. Of modest means, she uses her intelligence to pluck and achieve well beyond what other in similar circumstances would. Her ceaseless effort and determination are inspiring. She pushes herself (and those around her) to get as much as possible from each aspect of UWRF education, employment, and co-curricular activities," wrote Rellen Hardtke, associate professor of physics, in her nomination letter. "I can honestly say that in my years of teaching, she is perhaps the hardest-working and most accomplished student I have ever known."

Peterson, a senior biology major, has helped with the Kinnickinnic River Clean Up, the Backpack Program, and the Natural Resources Club. She was an Orientation Transition Leader, and served as president of the Parker Hall Council.

"Danielle is the only student I have worked with over the past eight years that had so many volunteer experiences and certifications on her resume that I suggested she not list them all," Linda Jordan, an academic coach in UWRF's Academic Success Center, said. "One of her special qualities is her ability to engage, lead, and motivate students. She brings energy and a spirit of fun to training students whether it be chainsaw safety and firefighting techniques, serving as a UWRF Orientation Leader, teaching Upward Bound students during the summer, training River Falls elementary students how to fill backpacks with food, or as a spring break destination participant. Her superb organizational skills have made it possible for Danielle to achieve academic success, conduct research, work part-time and make significant contributions to the campus and River Falls Community."

Stafford, a senior social work major, serves as president of the Student Social Work Association. She brought the "Walk A Mile in Her Shoes" event to campus in 2013 to raise funds for victims of gender violence and raise awareness of sexual assault. She has worked with the Minnesota AIDS project, the Minnesota Second Chance Coalition, the Mississippi Valley Alano Society, and countless other social work and arts based organizations. She also served on the UW-River Falls Non-Academic Misconduct hearing committee.

"Erica clearly articulates a responsibility to serve the community, both as a student, a social worker, and an involved citizen. She has been very committed to exemplary performance and making a difference in the lives of others," wrote Tamara Kincaid, assistant professor of social work, in her support letter.For more information, email blake.fry@uwrf.edu or call 715-425-3711. 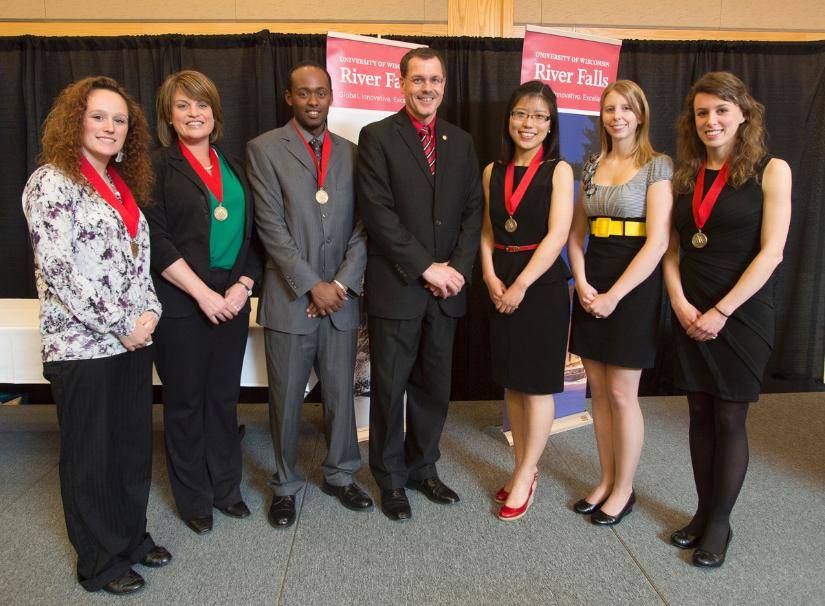 Photo:  University of Wisconsin-River Falls Chancellor Dean Van Galen presented six students with the 2014 Chancellor's Award for Students in the University Center  May 1. Students receiving the award, from left to right, are Danielle Peterson, Erica Stafford, Anwar Abda, Chancellor Van Galen, Liyuan Feng, Kayla Cavalheiro, and Katrina Hanson. Kayla accepted the award on behalf of her husband, Gustavo Cavalheiro, who could not attend the ceremony. Students are nominated and chosen for their leadership, service and commitment through various projects and activities.