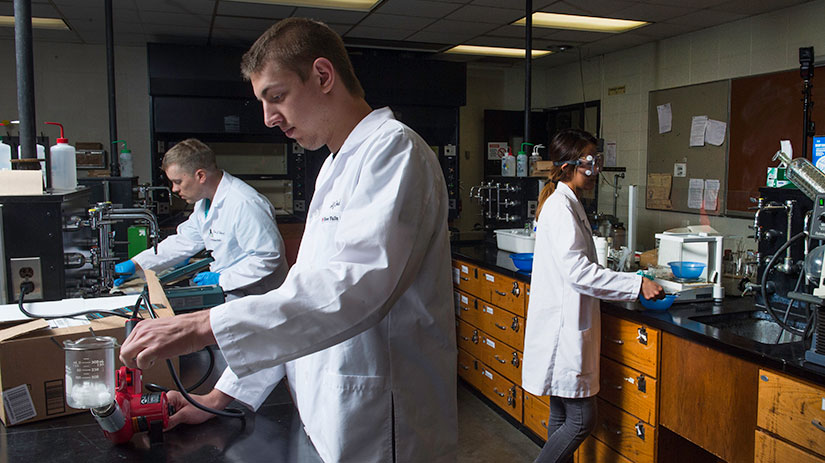 University of Wisconsin-River Falls SoPOD team members Eric Wenz, left, Andrew Lind, center, and An Trieu, right, create prototypes of their product in the lab. The team won the Wisconsin Big Idea Tournament and will receive a $25,000 grant for their business. They reached the semifinals in the International Business Model Competition May 1-2 at Brigham Young University.

May 6, 2015 — An innovative plan by a group of University of Wisconsin-River Falls students to market a biodegradable soap pod earned them a top spot at an international business competition on May 2.

The students and their creation, the SōPOD, reached the semifinals of the International Business Model Competition (IBMC) in Provo, Utah, placing among the top 22 contenders in a field of more than 3,800 teams from 276 schools and 15 countries. The competitors were judged on their ability to test their hypotheses in the field and to develop a business model.

UW-River Falls senior Eric Wenz, a business administration major from Hudson, called it "the trip of a lifetime."

"The experience was amazing," Wenz said. "There's really no other way to explain it."

Wenz was joined by senior Andrew Lind, a business administration major from Bloomington, Minn., and by junior An Trieu, a chemistry major from St. Paul, Minn. They will receive $2,000 for reaching the semifinals of the IBMC. That's in addition to the prize money the team won for taking first place in UW-River Falls New Venture Competition, which rewarded them for creating and testing a hypothesis, then altering it based upon feedback from consumers. The team also took first place in the 2nd Annual Wisconsin Big Idea Tournament held April 11 in Madison. As a result of that competition, they received a $25,000 Ideadvance seed grant from UW-Extension for the SōPOD.

SōPOD was founded with the idea of developing biodegradable pod technology that would allow travelers to carry body wash, shampoo, and conditioners in carry-on luggage while avoiding TSA 3-1-1 restrictions. After speaking with potential customers, the team quickly learned that their most promising customer segment was hotels seeking to reduce their carbon footprint. By replacing small plastic shampoo and conditioner containers provided in hotel rooms with biodegradable pods, hotels could significantly reduce their dry waste production.

Wenz said they have been in talks with several large hotel chains, including InterContinental Hotels Group, the parent company of Holiday Inn, to feature the SōPOD in their hotels. That particular company is pursuing an aggressive sustainability policy, and they believe SōPOD could help reduce waste.

"Our product will actually get them to that goal," Wenz said.

Danielle Campeau, director of the UWRF Center for Innovation and Business Development, said she was incredibly proud of the team. They performed extremely well against a tough group of competitors, including Ivy League schools like Harvard and MIT, she said.

"This was UWRF's first year creating a competition of this sort and we not only won the state tournament, but also moved on to the semifinals at the international competition," Campeau said. "Team SōPOD stepped up to the plate in a very challenging environment and represented UWRF and the State of Wisconsin very well."

For more information, contact Campeau at 715-425-0643 or danielle.campeau@uwrf.edu. More information on the International Business Model Competition is available at http://www.businessmodelcompetition.com.