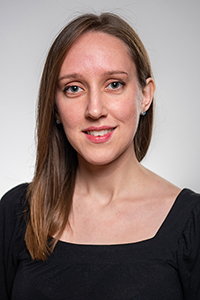 September 11, 2019 – Modern Language Associate Lecturer Erin Russ-Yribar has been selected to receive a $1 thousand grant in support of professional development in her role teaching modern language at the University of Wisconsin-River Falls.

The grant, funded by UWRF alumnus and long-time donor Manley E. Olson, ’59, is designated for instructional academic staff in the early stages of their career and provides resources to support individual professional development. All proposals for use of the grant are evaluated by the UWRF Academic Staff Professional Development Committee.

Russ-Yribar plans to the funds to attend the American Association of Teachers of Spanish and Portuguese (AATSP) Conference.

After five years of teaching Spanish, Russ-Yribar says she’s noticed an evolution in teaching and presenting materials and concepts to students, as well as, how students are adapting to new teaching methods.

“Many of the workshops at this conference revolve around this very idea – changing and evolving teaching methods to align with students' learning abilities, particularly the Spanish language,” said Russ-Yribar. “As a language Instructor, I find myself constantly making an effort to maintain my students' interest for learning a second language.”

As requirement of the grant, Russ Yribar will provide a brief written report to the donor on how the funds were used and the impact it had on her professional development.

About Manley Olson
Manley E. Olson graduated from UWRF in 1959 with majors in both history and political science, having been the first UWRF student to major in political science. While a student, Olson participated in many campus activities outside the classroom and was a member of the men’s basketball team. He continued his education at the University of Minnesota where he received his Ph.D. and worked in education for over 40 years and served in a variety of volunteer activities.