November 11, 2021- The city of River Falls ranks No. 34 in the safest college towns in the country, according to a recent SafeWise study, The 50 Safest College Towns in America of 2021. This ranking is up 26 spots from River Falls’ No. 60 ranking in 2020. The study reviewed 422 cities with populations of at least 15,000 that were home to accredited colleges with four-year degrees. 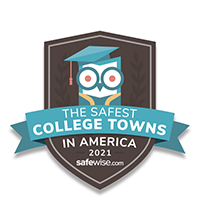 SafeWise reviewed data from FBI statistics for their study. To determine the level of violent crimes, it examined the number of reported murders, rapes, robberies, and aggravated assaults in the college towns.

River Falls Police Chief Gordon Young agrees that this ranking is a testament to the work done in River Falls to keep both violent crimes and property crimes as low as possible.

“I could not be prouder of the way our department and Chief Fleury’s University Police Department work together to serve this community," Young said. "We also want to extend our gratitude to all the community members who also strive to make River Falls a safe and positive community to work, play and live.”

River Falls was one of only three Wisconsin cities in the ranking, and it was the only city with a school in the University of Wisconsin System to be included in the top 50.

“River Falls is certainly a special community to live and learn in, with safety a top priority in both cases,” said UW-River Falls Chancellor Maria Gallo. “We are thrilled to see this acknowledgment from SafeWise and know that our students and their families will appreciate this reassurance. Many thanks to the UW-River Falls University Police Department and the City of River Falls law enforcement for their role in crime prevention, as well as in education and community building.”