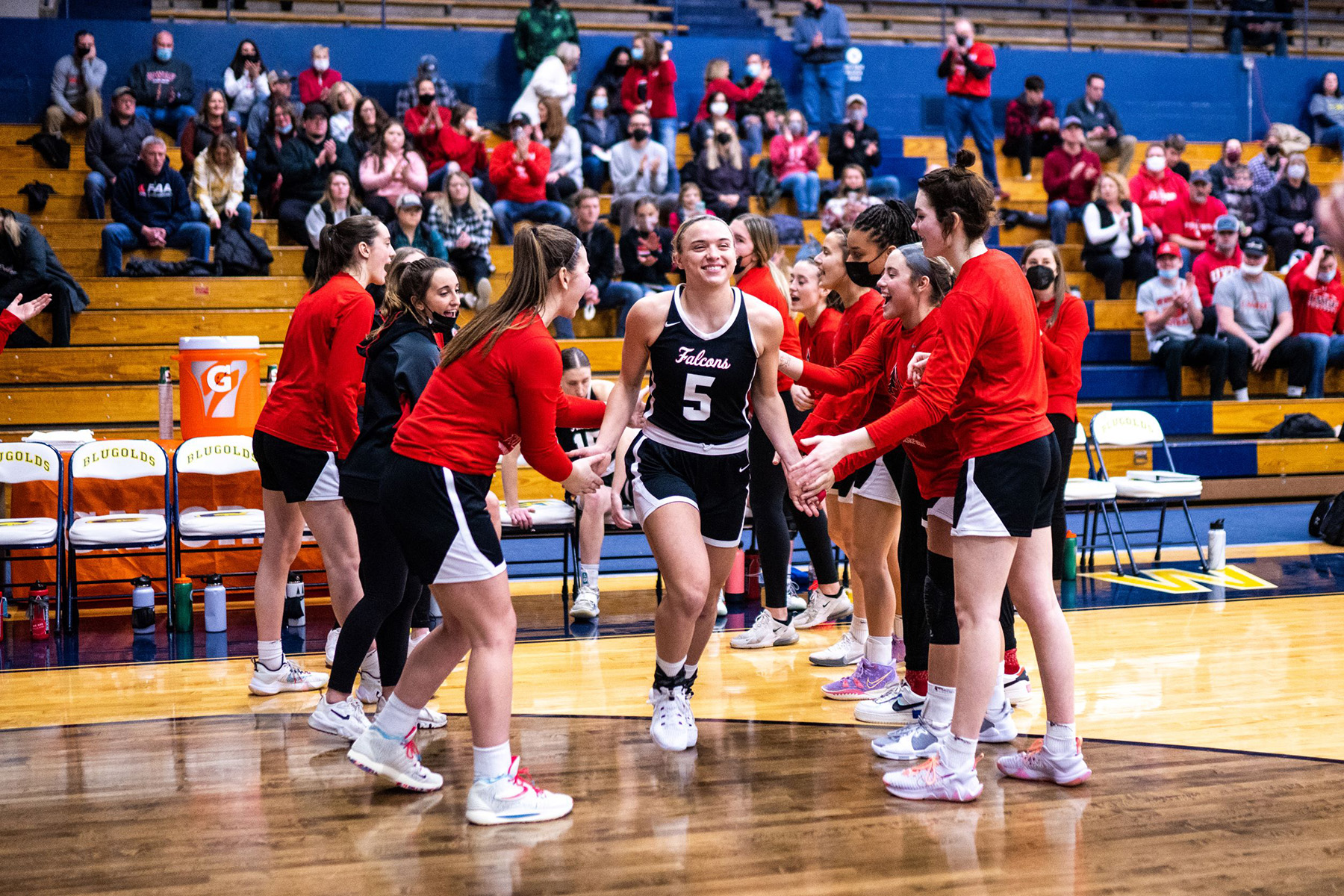 UWRF student-athlete Kameri Meredith is all smiles as she is introduced before a UW-River Falls women’s basketball game in the WIAC tournament on Feb. 21 at UW-Eau Claire. Sam Silver photo.

Kameri Meredith: Rising to the challenge

Dec. 12, 2022 - For most college students, studying for classes is a full-time job. That job becomes tougher for those who attempt to participate in a college sport.

Meredith, a junior exercise and sport science major who excels in volleyball and women’s basketball for the Falcons, was diagnosed with Type 1 diabetes on April 13, 2020 – about four weeks after her senior year at Colfax High School was cut short by the COVID-19 pandemic.

That left her only a few months to learn how to manage Type 1 diabetes before heading to UWRF and launching her college volleyball career.

“It’s definitely been a big learning curve,” Meredith said, “but my family and teammates and coaches have helped out a lot.”

When a patient has Type 1 diabetes, it means the person’s pancreas doesn’t make insulin or makes very little insulin. Insulin helps blood sugar enter the body’s cells for use as energy. Without insulin, blood sugar can’t get into cells and builds up in the bloodstream. High blood sugar is damaging to the body and causes many of the symptoms and complications of diabetes, according to the U.S. Centers on Disease Control and Prevention.

Meredith’s diagnosis meant learning a whole new language – one she won’t get credit for in school but will help her to enjoy an active, healthy life.

Her vocabulary now regularly includes acronyms such as CGM (continuous glucose monitor), ICR (insulin to carb ratio) and IOB (insulin on board). She wears a CGM patch on her arm around the clock that sends her glucose numbers to her cellphone and smart watch every five minutes and is constantly assessing the ICR of food she eats to ensure she maintains an appropriate IOB level.

If that all sounds complicated, that’s because it is, but Meredith said she is getting better at understanding her disease all the time.

“It constantly affects your life,” she said, noting that Type 1 diabetes makes it harder to join friends for spontaneous activities such as sharing a midnight pizza or visiting an ice cream shop because unplanned eating could throw her blood sugar levels out of whack.

To maintain her health, she must estimate the amount of carbohydrates she plans to ingest and then take the proper amount of insulin – 10 to 20 minutes before eating or drinking – to keep her blood sugar in balance.

“I’ve got random carb facts in my head,” Meredith said with a chuckle. “Someone names a food and I can tell them the exact number of carbs it has.”

Her journey with Type 1 diabetes began in spring 2020 with a trip to the doctor after the normally energetic Meredith lost more than 20 pounds in three weeks and found herself feeling lethargic, extremely thirsty and in constant need of trips to the bathroom.

The newly diagnosed patient later confided to her parents, Rich and Pam Meredith, that she had occasionally dealt with blurry vision and bouts of vomiting during her final high school basketball season but had brushed them off as no big deal.

Though the symptoms were similar to those of a former basketball teammate with Type 1 diabetes, the diagnosis still came as a shock to Meredith after a healthy, athletic childhood.

“I was not too accepting of it at first,” she acknowledged.

Over the past 2½ years, however, Meredith has gotten better and better at managing her blood sugar levels. Still, there are bumps in the road.

This summer, for instance, Meredith passed out while doing beverage cart duty at an Eau Claire golf course. Her boss found her unresponsive and lying on the ground next to the cart. The boss called 911 and Meredith’s mother, who told him where to find her life-saving medication and how to administer it.

Meredith had known her blood sugar level was low but thought she could finish one last task before addressing it. Unfortunately, she learned the hard way that she can’t put off corrective action when her levels are askew.

“She does the best she can,” Pam Meredith said of her daughter. “She does not want to go low, but it does happen. Overall, I think she does a great job of regulating her blood sugar while still living her life like she always has, participating in sports and going to college.”

Rich Meredith echoed his wife’s pride in how their daughter has dealt with the many challenges posed by Type 1 diabetes.

“There are hiccups along the way,” he said, “but Kameri always bounces back, dusts herself off and just keeps going.”

As Meredith has learned to live with the disease, she has grown to take its ups and downs in stride.

“At times I do get down about it or frustrated because sometimes it seems like a lot, but I just keep going,” Meredith said. “I take it a day at a time and, if I have a bad day, I just think tomorrow will be better.”

Her coaches are impressed with the strides Meredith has made, both on and off the court.

“Kameri is a highly respected individual within our Falcon volleyball program,” said UWRF volleyball coach Dipen Patel. “She has an impeccable work ethic and commitment to our Falcon family and represents volleyball, women’s basketball, the Athletic Department and the university with great pride.”

Though only 5-foot-7, Meredith uses her 28-inch vertical jump to sky for rebounds in basketball and to hit thunderous kills in volleyball. As of mid-October, she ranked second in the Wisconsin Intercollegiate Athletic Conference in points per set and led the Falcons in kills with 365 through 27 matches. She was the Falcons’ second-leading rebounder in the 2021-22 season, her first in the basketball program.

“The kid’s an incredible athlete,” women’s basketball coach Shelby Lyman said of Meredith, a standout four-sport athlete in high school who initially was going to play just volleyball in college but as a freshman emailed Lyman about the possibility of taking a shot at basketball too. “She can guard (positions) one through five, she loves to rebound and she’s turned herself into a great shooter.”

Outside of the sensor on her upper arm, spectators would never know the always-hustling Meredith lives with a serious disease.

At practices, Meredith wears an Apple watch that displays the blood sugar levels tracked by her CGM patch. She also keeps a supply of snacks on hand in case her blood sugar gets too low and, if needed, can give herself a dose of insulin to ensure her blood sugar doesn’t rise into a danger zone.

An athletic trainer helps monitor her levels during home basketball games, while teammates have gladly taken on that task when the Falcons are on the road. In volleyball, an assistant coach or injured teammate tracks Meredith’s blood sugar levels during matches.

“I have a lot of help from my coaches and teammates,” Meredith said. “There’s always someone on the bench watching my phone and checking my numbers.”

On occasion, that means pulling Meredith off the floor to be safe – an action she doesn’t like but understands.

“You can’t argue with the numbers,” Lyman said, adding that Meredith is the first athlete she has coached with Type 1 diabetes. “We tell Kam we have to get your numbers up or down before we can put you back in.”

“We always have snacks and glucose tablets with us on the bench, and we always have personnel that are prepared to step up and enter the game and execute the game plan,” Patel said. “It is a great team and supportive effort.”

Thanks to the resources at UWRF, supportive teammates and Meredith’s responsible nature, the arrangements have worked well.

“There have been some learning lessons along the way, but I give her a ton of credit for how she deals with it all,” Lyman said. “She’s an absolute joy to be around.”

The Meredith family is incredibly thankful for how the university has stepped up to help Meredith on her health journey, from arranging her schedule to accommodate sports and appropriate meal times to allowing her to keep an extra refrigerator in her dorm room for insulin.

“UW-River Falls has been unbelievably supportive and accommodating. They’ve really gone above and beyond,” Pam Meredith said.

The family is especially appreciative of the people closest to Meredith on campus.

The strong support network makes it possible for Meredith to keep doing the things she loves.

“I love volleyball and basketball. They’re the two best sports ever,” said Meredith, who has never been able to choose a favorite and thus was thrilled to get the opportunity to continue both in college even after being diagnosed with Type 1 diabetes.

During the fall crossover period when the two sports overlap, Meredith completes volleyball practice and then heads straight to the locker room, where she changes into basketball gear and returns to the court for hoops, possibly drinking a Gatorade or slamming a low-carb protein bar if her blood sugar needs a boost.

Patel said Meredith sets the tone by presenting to the entire squad and staff at the volleyball team’s first team meeting of the season to educate them about her condition.

“I think Kameri is an inspiration to many young children or athletes dealing with Type 1 diabetes,” Patel said, recalling a message to that effect from the mother of a girl with Type 1 in response to a viral UWRF volleyball TikTok video of Meredith soaring for a kill. “She carries herself well to prepare those around her versus those in her circle not knowing. There seems to be a stronger bond when teammates have her back in areas outside of volleyball too.”

When asked about serving as a role model for others living with Type 1 diabetes or other chronic illnesses, Meredith said she hadn’t thought about that possibility but would be honored if her example helped anyone else.

“It would be cool if I could inspire younger kids or other college students who want to play sports not to let Type 1 diabetes stop them,” Meredith said. “Hopefully, they might see me and think, ‘If she can do it, anyone can do it.’”