JUNE 10, 2011—Chris Mueller has been named the new executive director of University Advancement at the University of Wisconsin-River Falls. 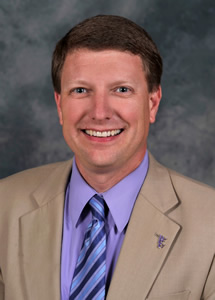 As executive director, Mueller will lead significant fund-raising initiatives for the university, including planning and implementing a comprehensive fundraising campaign. The executive director position reports to the Chancellor and serves as the university’s chief development officer and president of the UW-River Falls Foundation.

“Chris will bring a great deal of experience and energy to his new role at UWRF,” says Chancellor Dean Van Galen. "Working with our campus, the UWRF Foundation Board of Directors, and alumni and friends, Chris will play in important role in encouraging a high level of support for the university's mission, including charitable giving to the foundation.”

In his current position, Mueller is responsible for implementing key components of a comprehensive fund-raising program including managing a portfolio of gift prospects, providing counsel to colleges and units on development initiatives, and organizing and leading prospect identification efforts. Prior to joining Western Carolina, he held positions with Stamats, Inc. in Cedar Rapids, Iowa, and Briar Cliff University in Sioux City, Iowa.

“Having lived in the midwest for many years, the Twin Cities region has been one of my family's favorite places,” says Mueller. “The opportunity to live in such a dynamic region and to work for a dynamic university is unequaled. I look forward to sharing the message and the vision of UWRF and working with all constituencies to enhance and strengthen the university.”

Mueller earned a bachelor of science degree in physical education from Stephen F. Austin University in Nacadoches, Texas, and a master of business administration degree from the University of South Alabama in Mobile.