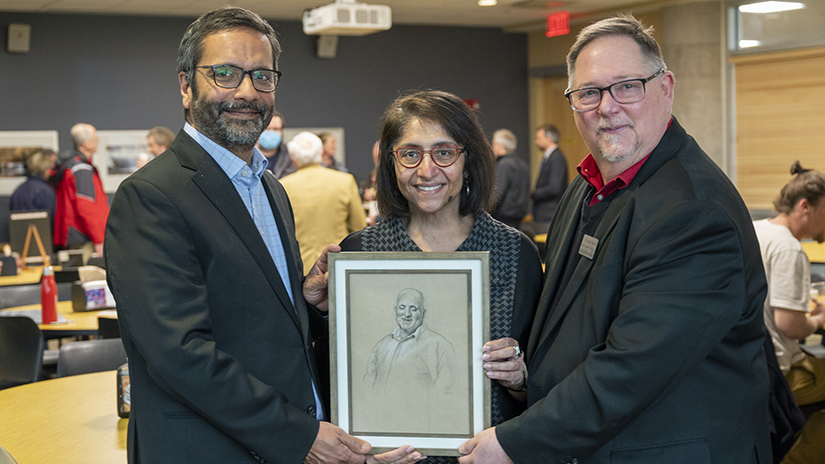 Imtiaz Moosa’s siblings Rahim Moosa, left, and Taslim Moosa, with Dean Yohnk, UWRF College of Arts and Sciences dean, with a drawing of Imtiaz presented to them at the inaugural Dr. Imtiaz Moosa Philosophy and Ethic Speaker Series event April 25.

April 27, 2022 – Two siblings of University of Wisconsin-River Falls philosophy Professor Imtiaz “Imi” Moosa recalled the many letters and well wishes they received after their brother died in December 2020.

“He was a star,” Rahim Moosa said of his brother Imtiaz. “We got letters from students telling us how he had changed their lives. It sounded like he was really a favorite professor. We knew he was a good speaker. We did not know how loved he was until we got their stories.”

Taslim Moosa, Imtiaz’s sister, agreed. “We would not have guessed his students enjoyed him so much.”

Rahim and Taslim visited UW-River Falls on April 25 for the inaugural Dr. Imtiaz Moosa Philosophy and Ethics Speaker Series. The speaker series was established in 2021 with generous gifts from the Moosa family and many campus and community members. The goal of the series is to feature leading experts and thought leaders on a variety of pressing philosophical, social justice and contemporary ethical issues.

During the ceremony, a plaque was dedicated honoring Imtiaz that will be placed outside his favorite classroom in Kleinpell Fine Arts, Room 302.

Dean Yohnk, College of Arts and Sciences dean, presented Rahim and Taslim with a drawing of their brother created by Billy Thao.

In addition to his siblings, Rahim’s spouse, Andrea Mills, and their children attended the inaugural speaker series. Another sibling, Mehmona Moosa-Mitha, an associate professor in the School of Social Work at the University of Victoria in Victoria, British Columbia, Canada, was unable to attend the event.

The inaugural speaker for the event was Gordon Marino, Ph.D., professor emeritus of philosophy and curator of The Hong Kierkegaard Library at St. Olaf College. His lecture was titled “Six or Seven Lessons I have Drawn from My Long Walk with Soren Kierkegaard.”

Imtiaz was enthusiastic about debate and ethics.

“I’m sure he would be overjoyed and thrilled with the series,” said Rahim, a professor in the Department of Pure Mathematics at the University of Waterloo in Ontario, Canada. “He really enjoyed talking with students and other people about philosophy and everyday questions about ethics.”

Attending the speaker series allowed the family to celebrate Imtiaz’s life. Only Rahim was able to attend his brother’s funeral service because of the COVID-19 pandemic.

“This was a way to celebrate and remember him,” said Taslim, of London, Ontario, who teaches in the School of Communication Sciences and Disorders at the University of Western Ontario. “It is a huge honor to be here. I am thankful for everyone who took the initiative to write to us. It was good for us to see he had built a community of warmth around him.”

Imtiaz taught at UW-River Falls from 1989 until his death. He was born in Africa and his family emigrated to Canada when he was age 16. He had a degenerative eye disease, which caused him to lose his eyesight in 2006.

When he lost his sight, Imtiaz continued to show the strength of will and immense energy, his siblings recalled. The brothers would go hiking in Wyoming and Imtiaz would walk over 10 blocks to teach at UWRF regardless of the weather and would decline rides to enjoy the outdoors.

During the ceremony, Yohnk told the Moosa family that Imtiaz had a family at UWRF. “I hope you take that away in your heart,” he said, “How appropriate that every year we will have a time of coming together to honor him.”

Professor Neil Kraus, chair of the History and Philosophy Department, said Imtiaz challenged students to think about things they never thought of before and to think in diverse ways.

“He welcomed debate and his classes exemplified what higher education should be in a democracy,” Kraus said.

More than $30,000 has been raised to help provide financial resources for the annual contemporary philosophy and ethics speaker series.

To donate to the Moosa speaker series, go to https://www.uwrf.edu/Give/MoosaMemorial.cfm.