The  sound of children laughing was distantly audible over the roar of the Kinnickinnic River as the water rushed over the upper dam near River Falls’ Glen Park. Near the base of the dam, a group of younger kids that had stayed behind sat with their parents while the older kids wandered up the South Fork of the Kinni towards the Swinging Bridge.

The kids were part of a group of homeschooled students whose parents drove them a full hour from Goodhue, Minnesota, to play in and study the environment around the Kinnickinnic.

“Every week we go on outdoor adventures with our homeschool group,” said Emily Reese, one of the parents. “So this week we decided to come here.”

The homeschool group is among the visitors and River Falls residents alike that city planners hope to better accommodate with the Kinni Corridor Project. A study the city conducted for the project estimated that on an average weekend day in the summer, more than 150 people visit the extensive trail system that follows the river, beginning near the lower dam.

The city is midway through a two-year planning process on how to improve its 7-mile-long Kinni Corridor for residents, visitors and neighboring businesses. The planners just completed a series of “Tech Talks” on potential aspects of the project. Now the planners are preparing for four days of public hearings at the end of October on the plans and maps generated so far, with an aim to complete the planning by next summer.

The end goal is to create a plan that the city will vote on and put into action, with the intention of improving land use, economic development, tourism and conservation along the river in River Falls.

For business owners making a living along the river, potential change is a big deal. Bonnie Hintze is one of the owners of the Riverwalk Vintage Market, which has entrances facing both Main Street (away from the river) and the Kinni. The city is already beginning to make changes along the river such as the new walking path that was completed just this month, and the changes are already beginning to have ripple effects on the local businesses.

“People mostly come in … through the main doors,” Hintze said, “but with the walking path, bike path and all that stuff that they’re putting in and all the promoting that they’re starting to do regarding the river, it’s starting to turn around a little bit.”

Buddy Lucero is the River Falls director of community development and has also been appointed project manager for the Kinni Corridor Project. The project, he said, is moving into a new stage. Since January, the city had been putting on “Tech Talks,” which were a series of presentations designed to inform the public on topics related to the Corridor Project. The topics included river ecology and dam removal alternatives, and they were meant to build on one another so the public could have a fuller understanding of the  elements that go into the planning process.

The last Tech Talk was on Sept. 7. Now that the public has a general understanding of the project, Lucero said, the city is asking for feedback through what it is calling a “design charrette.”

The charrette, Lucero said, will be a four-day process. The first day will begin with a general meeting where the planning committee, city technical staff and project consultants will gather and explain to the public where they are at with the planning process. The subsequent three days will be an open house in the lower levels of the library, where the public can come in at any time to look at the maps and graphics that the planning committee has generated, showing how the Kinni Corridor might eventually look.

The public, Lucero said, will have a chance to give feedback on what they see at the charrette.

“(It’s) for people to come in,” Lucero said, “see what the work is, provide ideas, concepts, look at what they’re doing, ask questions.”

After the charrette, the planning committee will take this feedback and create two or three potential plans laying out what the river corridor might look like. These potential plans will then be run through feasibility studies to examine things such as cost and environmental impact.

“From that,” Lucero said, “the committee will try to massage that to a single plan that will be presented to the City Council.”

This final plan is not expected to come out until spring or summer  next year. The charrette, in the meantime, will kick off on Oct. 25 in the basement of the River Falls Public Library at 1 p.m., and will run through to Oct. 28. A full calendar of events and additional information on the Kinni Corridor Project is available online at www.kinnicorridor.org. 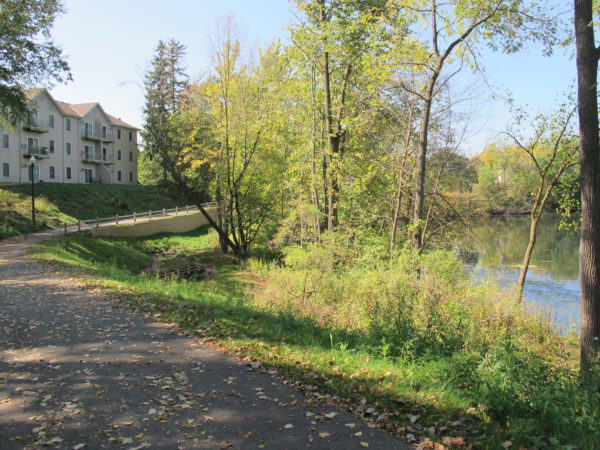 A new bike path along the edge of the Kinnickinnic River,  linking downtown River Falls to Glen Park, is the first of many changes that will be made to the river through the Kinni Corridor Project. Thursday, Sept. 21, 2017.

Permission to republish this story is granted provided credit is given to the author and to Falcon News Service.