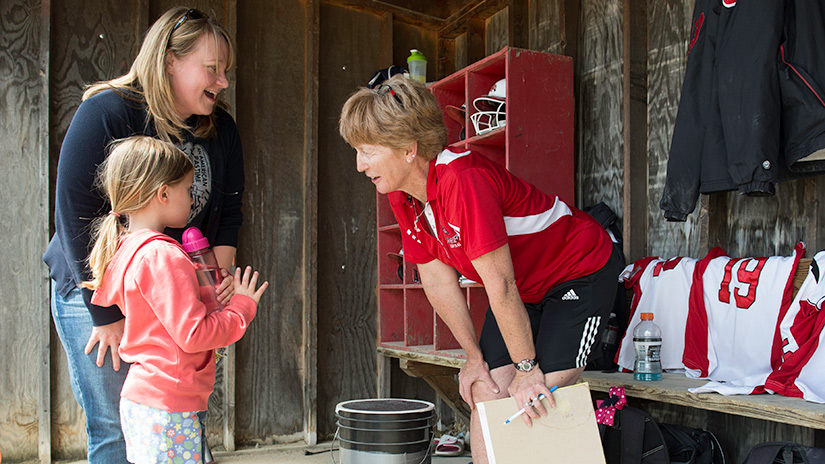 UW-River Falls head softball Coach Faye Perkins gets a visit from former player Cindy (Ostertag) Hoops, in the dugout before the game against UW-Oshkosh April 18 and is introduced to Hoops' four-year-old daughter, Mallory. Hoops played for Perkins from 1998-2001. Many of Perkins' former players returned for Alumni Day to see Perkins honored for her 22 years of coaching at UW-River Falls. She will retire at the end of the 2015 season.

An end of an era will come later this spring when Perkins retires from coaching the UW-River Falls softball team.

She led the 2012 team to a school record 34 wins and the team finished just one win away from reaching the NCAA Div. III final eight NCAA Championship series. UWRF also played in the 1993 and 1994 NCAA Championships. She has coached dozens of Falcons to All-WIAC honors and most importantly to Perkins, six Falcons have earned the coveted WIAC softball Scholar-Athlete award. She was named the WIAC Coach of the Year in 1996 and has 518 career wins to date. She is just one of 26 active coaches in the NCAA Div. III that have more than 500 career wins.

All of those records and honors are great. But to Perkins it has been the students who she has cared for, counseled and been a role model for that mean the most to her.

And that feeling is mutual as several Falcons responded to questions about their favorite Perkins' stories and the role she has played in their personal and professional careers.

All six former players mentioned her passion for teaching, coaching and life.

"Have passion for whatever you do," said Perkins. "Give everything you are involved in 100 percent. You get out of life what you put into it and if you do that, you will have success," is her simple, but true-to-life comment about her teaching and coaching philosophy.

"Faye taught me to always be passionate about what I am doing," said Anna Poulter-Hendrickson. "Whether it was on the field or in the classroom, I never saw Faye not passionate about the task at hand. She was always excited and enthusiastic about what she was doing and it was hard to not be inspired by her passion."

Poulter-Hendrickson played for Perkins from 2001-04, was the WIAC softball Scholar-Athlete in 2004 and was named to the All-WIAC teams in 2001, 2003 and 2004. She is the program assistant for the University of Wisconsin women's basketball team.

"Faye really taught me the importance of truly being passionate about what one does," said Nikki Fennern. "Faye exudes passion for teaching, coaching, and developing young people into great adults. Finding a path in life that leads to doing that which is one's passion means never having to spend a day at 'work.' Faye helped me find that and then helped me to develop it into my career."

Fennern is the athletic director at St. Mary's University in Winona, Minn., a NCAA Div. III institution that has 21 intercollegiate sports in its module. She played for the Falcons from 1994-97 and was named to the all-conference team in 1997.

"Believe in yourself, be positive and never give up. A person should use their strengths and work on weaknesses," added Perkins.

"Faye's personality is infectious - and I can't help but SMILE when I think of my time with her," said Chris Stainer, who played at UWRF from 1989-92. "She made you laugh, she made you cry (in a good way), she empowered you to strive to want more for yourself and others, and she was always their when you needed her.  She will be very missed on the ball field - but her impact to the program, and to the conference as a whole, is a testament to the POSITIVE impact that she has made on so many!"

Stainer is in her 17th year as the head softball coach at UW-Stout. Last year she was named the WIAC Coach of the Year. In 2005 she led the Blue Devils to the WIAC regular season championship.

Perkins talked, with tears in her eyes, about what she believes are her accomplishments. Wins and losses were never mentioned – it was the opportunity she had working with young people that stood out.

"Working with students and trying to help them be successful," said Perkins with a hanky in hand. "To see them grow up. They come in as a freshman not knowing if college, or softball, is for them. Then I get to watch as they grow into young professionals – that's very gratifying. Then after they graduate, seeing them in relationships, watching them with their families and to see what they've accomplished."

"Clearly Faye is a true role model for me," said Jody Gabriel, who is the head softball coach at Macalester College in St. Paul, Minn. "I had no intention of becoming a collegiate coach when I entered college.  However the experiences I had as a student-athlete were very meaningful and the skills I learned as a member of the team were so applicable to life in general that I wanted to be able to offer them to other young women."

Gabriel played for the Falcons from 1994-96. She was a long-time assistant coach with the team and when Perkins was named interim dean of the UWRF College of Education and Professional Studies (a position she held from 2007-11), Gabriel stepped in as the Falcon head coach. Her teams were 108-60 and won the 2011 WIAC regular season and playoff championships, and earned a berth into the NCAA Tournament. Gabriel was named the WIAC Coach of the Year in 2011.

Perkins has many favorite memories – too many to list – but she mentioned two that stand out.

"In the classroom, seeing a student have that "aha" moment – seeing that light come up – that's fun to be a part of," said Perkins.

"As a teacher and coach now, I find myself using the same techniques and styles as Faye used with me," said Mindy Rudiger. "I've shared many stories with my students/athletes about Faye! I teach the same mental practice ideas to my athletes that I learned playing softball for Faye. Knowing that, Faye has obviously greatly impacted me as a person, as well as my educational career."

Rudiger is the head softball coach at St. Croix Central High School, and a fifth grade teacher at the middle school. She played at UWRF from 2006-09 and was named to All-WIAC teams all four years she competed. She still holds Falcon career records for runs scored (171), RBI (142) and home runs (38).

"Working in the television industry, communication and teamwork are key components," said Ashley Hanley. "There was no better 'classroom' to learn that than on the softball field. Faye was a big part of making sure we not only knew the fundamentals of the game, such as hitting and fielding, but making sure we were prepared for life after softball. There's not a day that goes by where I'm not drawn back to the field. And those are lessons that last beyond a lifetime."

Hanley is a reporter for KEYC-TV in Mankato, Minn. She played at UWRF from 2010-13 and was named the WIAC softball Scholar-Athlete after her senior season. She was named to the All-WIAC team in each of her four seasons with the Falcons.

"As a teacher, I try to emulate her style of teaching. She always allowed students to learn and grow, but was there to interject and enlighten a concept/teaching tool that would make the lesson even better. I constantly find myself doing this, both in the classroom and on the ball field," added Stainer.

"As I have navigated a career in the college athletic field, Faye's influence has always been a factor in the choices I have made," said Poulter-Hendrickson. "She taught me to not be afraid to question the things I felt needed questioned and push the issues that I believed in. Faye always put the student-athlete first and that is a rule I follow every day. Faye's passion for college athletics, physical fitness and teaching inspired me to choose the career I did and is probably the voice I hear in my head that helps me get through the tough times.

"Another favorite memory is the relationships Perkins still has today with former players and students. "On the softball field it's talking to alums and hearing the stories they have from the days they played. Hearing about the big and little things that happened on and off the field that were important to them," said Perkins.

At this year's annual Alumni Day Game April 18 at Ramer Field, Perkins wore several different T-shirts during the second game that teams created in memory of a season. She was heard in the dugout telling this year's team about a T-shirt and the significance to that team – winning back-to-back championships, team sayings (Good, Better, Best. Never let it rest. Until your good is better and your better is best!; Dirty Dog Defense; Once a Falcon, Always a Falcon; FFT – Falcons Fly Together).

With 22 years of coaching, Perkins has seen significant changes to the college game.

"When I started coaching a team would maybe hit five home runs in a season. Now it's more like 30-35," said Perkins. She says the reason is improved bat and ball technology and the fact that high school players work with coaches all year long and also work on their strength and conditioning.

Another change is in facilities. "When I came here we had a dirt field and a backstop – that was it. We would move benches to the field for the teams to sit on for games. The fields were slow pitch softball-type fields. Now we have dugouts, fences, bleachers – the facilities are so much better," she said.

In typical fashion, Perkins believes she has been the fortunate one during her coaching career at UWRF.

"I'm honored to be a coach here for 22 years," said Perkins at the end of the interview. "I've been blessed with a wonderful job and colleagues to work with. It's been a perfect fit for my family and I." Faye, of River Falls, is married to Joe McIntosh and they have two sons, Paul and Bobby.

Thankfully, for students and staff alike, Perkins will remain at UWRF as the chair of the UWRF Health and Human Performance Department, and because of her outstanding teaching style, hopefully teach classes in the department.