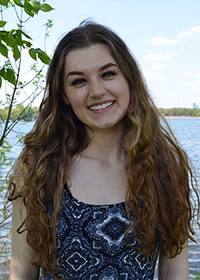 May 25, 2021 -- A University of Wisconsin-River Falls senior studying journalism and animal science has been named the first recipient of the Donovan E. Rasmussen Broadcast Journalism Fellowship.

Through the fellowship, Brooke Shepherd of Stillwater, Minn., will spend six weeks this summer reporting on the issue of obesity in Western Wisconsin. Her work will be featured in a broadcast documentary.

Shepherd is a former editor of the campus newspaper, the Student Voice, and will return in the fall as the assistant editor.

The fellowship is named in honor of Donovan E. Rasmussen (1922-2009), who in 2006, funded an endowment with the UW-River Falls Foundation to be used by the journalism program.