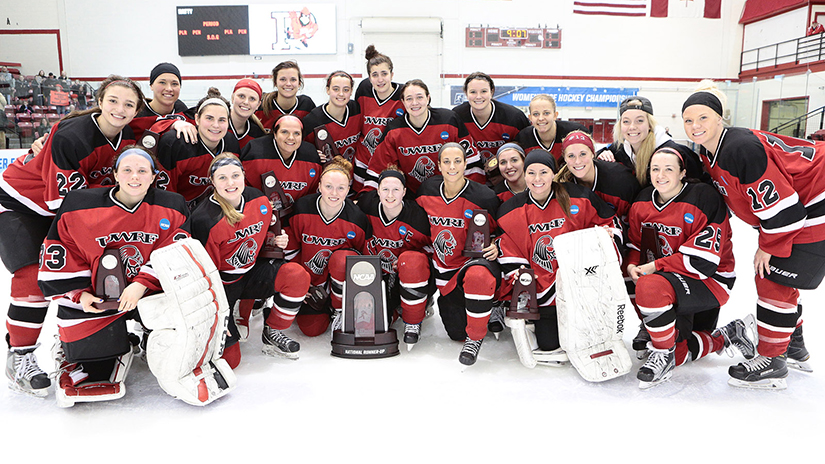 The Falcons came out in the first period and proved they belonged in the national title game, controlling the pace of play and the puck possession for the first part of the period.  The Falcons generated a couple of scoring chances early in the game but were turned away by Cardinal goaltender Camille Leonard.

UWRF would take the lead on the host Cardinals at the 10:39 mark of the period. Senior Chloe Kinsel, who scored Friday's game winner to put the Falcons in the title game, led a rush into the offensive end and took a shot that hit off the post and trickled into the slot. Sophomore teammate Carly Moran took possession and fired a shot past Leonard and into the back of the net. The goal was Moran's 22nd of the season and put the Falcons ahead 1-0.

Forty-three seconds after the Falcons took the lead, they were called for their first penalty. Junior Carina Randazzo was called for tripping at the 11:22 mark of the first stanza. Just eight seconds into the Plattsburgh power play, Kinsel chased after a loose puck in the neutral zone and drew an interference penalty that negated the power play.

Four-on-four hockey ensued for only 27 seconds before the Falcons were called for their second penalty. Freshman Haley Nielsen was called for holding, which resulted in a 4-on-3 power play for the home team.

Plattsburgh took advantage of the open ice on the 4-on-3 man advantage and off a scramble in front of Falcons goalie Angie Hall, Jordan Lipson picked up a loose puck and beat the Hall to tie the game at 1-1.

Plattsburgh took the momentum from the extended power plays and continued to sustain pressure in the Falcon end. The Cardinals would strike again late in the period at the 18:09 mark, when Melissa Sheeran would find the back of the net to put the hosts up 2-1. The first period ended with Plattsburgh out shooting the Falcons 15-5.

The second period began much like the first, with the Falcons controlling most of the action and getting some sustained pressure in the offensive end early, forcing the Plattsburgh goalie to make a couple of sprawling saves, but they could not tie the game up.

The Falcons would get a great opportunity at the 4:49 mark of the second period when Courtney Moriarty was called for hooking. UWRF would not be able to sustain any pressure on the power play as the Cardinal penalty killers did a good job getting into the shooting lanes and not allowing the Falcons to get set up in the offensive end.

River Falls got another opportunity to tie the game at the 7:42 mark of the second period when Sheeran was called for body checking. The Falcons generated a couple of quality scoring chances on the power play, but could not capitalize on the scoring opportunities.

UWRF's penalty killing was put to the test at the 10:05 mark when freshman Jillayne Gilbert was called for cross-checking. The Falcons did a good job on the penalty kill and Angie Hall made a couple of huge saves to keep the deficit at one.

15 seconds after the penalty to Gilbert ended, the Falcons were unable to get the puck out of their end, and Plattsburgh took advantage when Ashley Songin beat Hall to put the Cardinals up 3-1.

UWRF pushed back hard after going down two goals. River Falls once again controlled the pace and spent most of the next 5 minutes in the offensive end trying to pull within one. They generated a couple of quality chances but could not get their second goal of the game.

At the 18:37 mark of the period, the Cardinals struck again when Giovanna Senese got a rebound off a shot that deflected high in the air and she put it in the back of the net, putting Plattsburgh up 4-1. The second period ended with the Falcons being outshot 13-7.

River Falls came out with great energy in the third period as they tried to get back into the game. The sustained pressure paid off for the Falcons at the 2:04 mark when Plattsburgh's Muna Fadel was called for cross-checking. The Falcons would generate a few scoring chances during the man advantage, with shots from the point by Paige Johnson, but could not find the back of the net on the power play.

Not long after the power play ended, the home team struck for the final goal of the game at the 6:05 mark of the period. Katelyn Turk scored for the Cardinals putting them up 5-1.

The Falcons would get another chance on the power play at the 7:12 mark of the period when Megan Delay was called for cross-checking. The Falcons generated a couple of shots on the power play, but the Cardinal net minder stopped them, to keep her team up by 4.

The Falcon penalty kill was tested again at the 12:02 mark of the period when Randazzo was called for interference. UWRF did a great job keeping the home team to the outside, allowing Hall to see and stop all four shots during the power play.

The momentum the Falcons gained from the penalty kill was quickly negated just 12 seconds after the power play for the home team was over. Wagner was called for hooking and the Cardinals went up 5-1 on the power play. Hall stopped three more shots on the power play to keep UWRF in the game.

UWRF's penalty-killing capabilities were tested for the third consecutive time in the third period, this time just 1:12 after the end of the penalty to Wagner, Randazzo was called for slashing. Plattsburgh hit the post with a shot on the power play but could not score another goal, as the game ended with a 5-1 victory for the Cardinals.

The Falcons were called for six penalties on the evening, including three straight in the third period. Plattsburgh out shot the Falcons 40-15. UWRF controlled 21 of 59 faceoffs.

The title game wraps up an outstanding season for the UW-River Falls women's hockey team. On their way to a 23-6-2 overall record, the Falcons earned regular season and WIAC tournament championships. UWRF will lose Chloe Kinsel and Dani Buehrer to graduation. Earlier this week, three team members were named to the AHCA/CCM Division III All-American team: Kinsel, Sibley, and Paige Johnson.