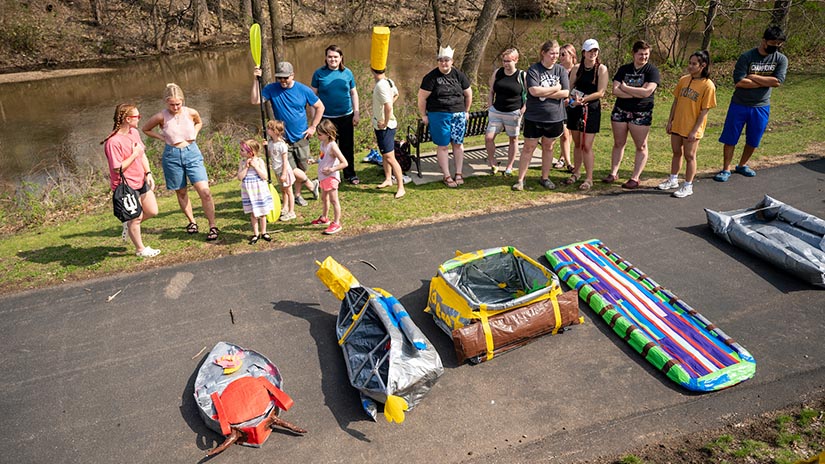 Design Foundation 2 students lined up their Falcon Regatta boats before they launched them in the Kinnickinnic River.

May 12, 2022 – Ten boats made from newsprint and duct tape by students at University of Wisconsin-River Falls launched into a chilly Kinnickinnic River Tuesday as the Falcon Regatta returned.

No lie. Bull Ship proved to be the winning design.

Working in teams of two, 20 students researched, designed and fabricated a flotation device that would support the weight of one of the team members. The challenge is they could only use 400 square feet of newsprint paper and 18 rolls of duct tape per team. They then raced about 25 yards down the Kinni near the City Hall of River Falls.

Samantha Harms, a junior computer science and information systems major, piloted the winning boat, decorated with horns to look like a bull. Her team member was Ellie Fisher, a sophomore BFA art and psychology major.

“We did research different types of boats and floatation devices,” Harms said. “Laying down and propelling the boat both with your feet and hands seemed like a good design. I even had paddles for my feet. We also didn’t want it to be too deep of a boat. I didn’t want the bottom to give out.”

Bull Ship also had straps to help Harms stay on it and a pointed edge to help cut through the water.

Harms enjoyed the class and learning to turn two-dimensional ideas into three-dimensional ones.

“I’ve learned a lot about looking at things from different perspectives,” Harms said. “Your first idea may not be the best one. We designed the boat so the only thing that could go wrong is human error.”

After winning the Falcon Regatta, which first started in 2013 but has not been held since 2018 because of the COVID-19 pandemic, Harms said the water was a bit chilly.

“It was very cold,” Harms, of Oswego, Ill., said. “I didn’t expect to quite take off like that. It had some flaws and definitely took on water.”

Fisher said she and Harms wanted to focus the design on speed and stability.

“We got an automatic A for winning,” Fisher, of Stillwater, Minn., said. “I’m pleased with how it went. I’m jealous of other people’s artwork on their boats.”

Breadon, associate professor and Art and Design department chair, said the final project brings together all the themes students have studied over the semester. Including drawing, scale drawing and creating a template to assess their design.

“It is a culmination and helps students understand how to build and work with three-dimensional large sculptural pieces,” Breadon said, noting in a school format it is difficult to create large-scale sculptural works because of financial and logistical restraints. “It is also just fun.”

Despite several students reporting the difficulty of the project, Breadon said it is quite easy.

“The biggest thing is getting them to believe it is a functional reality,” he said.

One boat that was not so lucky and took on quite a bit of water was Duck Boat designed by Lane Bohlig, a junior majoring in graphic design, and Kaito Nishino, a junior art major from Fukuoka, Japan.

“We were inspired by those giant swan paddle boats,” Bohlig, of Beaver Dam, said. “I think we might have made the boat too deep. It was a fun project. We spent a lot of time working on it.”

Bohlig said the class has allowed her to learn more about including depth in her designs. “I didn’t expect to like this class as much as I did,” Bohlig added.

Quinn Stoerzinger, first-year art education and BFA photography major, was part of a team that developed a canoe-looking boat with floatation devices on the side.

“This was a difficult project,” Stoerzinger, of St. Paul, said. “It took a long time. I love being able to come out and race and be competitive.

“What I am learning from this project is to make something sturdy and create supports and how different designs affect our boat,” Stoerzinger said. “It’s kind of like an engineering class.”

Stoerzinger, of Maplewood, Minn., is looking forward to being able to take what he learned in the class to students when he starts teaching.

“It will open their minds to 3D art and sculpture and how to use different materials. It will also teach them how to work together to make a practical design work.”