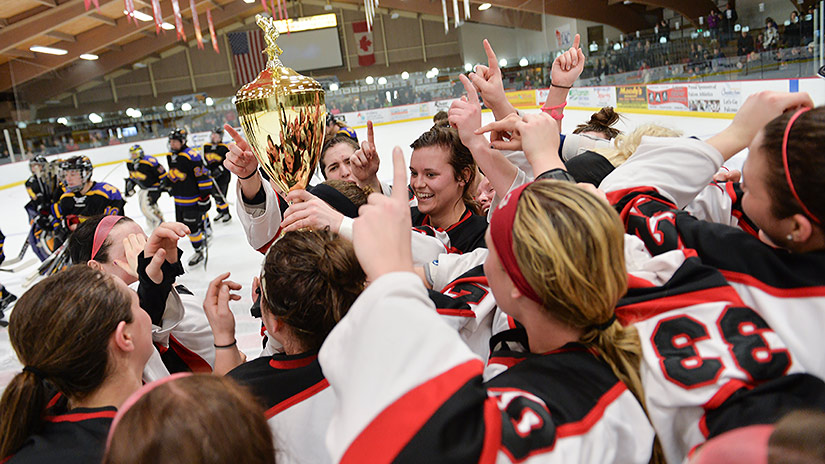 March 5, 2016 (uwrfsports.com)--The Falcons got a pair of goals from the conference player of the year Chloe Kinsel, and Dani Sibley had a 4 point game with a goal and 3 assists as the Falcon women's hockey team won the O'Brien Cup 4-1 over visiting UW-Stevens Point at Hunt Arena Saturday afternoon.

The Falcons come out flying in the first period controlling the pace of the game and sustaining offensive pressure. The fast start by the Falcons lead to the Pointers taking a penalty at the 2:35 mark of the period. On the ensuing power play, the Falcons generated a couple of quality scoring chances but were unable to get on the board.

After the power play, the Falcons once again controlled the pace of the game generating a few more great scoring chances including a couple of shots that went past the Pointer goalie but just trickled wide of the net.

The Falcons would break the scoreless tie at the 11:07 mark of the period. Carina Randazoo took a shot from the point that the Pointer goaltender blocked up in the air and when it came down Kinsel slammed it into the back of the net.  The goal was Kinsel's 23rd of the season.

The Falcon penalty killers would be tested at the 15:00 minute mark of the period when Amy Auran was called for checking. The Falcons would be up to the challenge as the defense blocked a couple of shots and Angie Hall made 2 big stops to keep the Falcons ahead 1-0.

After the power play, the Falcons would go on the offensive again generating a 2 on 1 scoring chance and a breakaway, but the Pointer netminder would make both saves and get a little luck, to keep the Pointers only down 1.

The period ended with the Falcons up 1-0.  The shots in the first period were even with both teams registering 8.

The sustained pressure finally paid off for the Falcons at the 5:39 mark of the period. The Falcons set up a 2 on 1 odd man rush and Chloe Kinsel made a perfect saucer pass to Dani Sibley, who buried it into the back of the net putting the Falcons up 2-0. The goal was Sibley's 20th on the season and the assist by Kinsel was her 19th on the season.

After the goal, the Falcons would again sustain pressure in the offensive end but could not get the third goal. The Pointers got on the scoreboard at the 8:29 mark of the period when a shot from the point appeared to hit a high stick and go into the back of the net. The officials ruled it a good goal and getting credit it for it was Logan Harper. The goal made it a 2-1 hockey game.

The Falcons would get an opportunity to take a 2 goal lead at the 14:21 mark of the period when the Pointers were called for a cross checking penalty. The Falcons would need only 22 seconds on the power play to take a 3-1 lead.  Paige Johnson took a shot from the point, Dani Sibley redirected it and Chloe Kinsel buried it into the back of the net. The goal was Kinsel's second of the game and 24th on the season.

After the power play, the Falcons really ramped up the intensity and looked to take a three goal lead and ice the game.  Two minutes later at the 16:21 mark of the period the Falcons went up 4-1, when Carly Moran took a rebound from a Dani Sibley shot and fired it into the back of the net. The goal was Carly's 20th of the season and the assist was Sibley's third of the game and 18th on the season.

The Falcons began to feel it after the goal, but the excitement was put on hold when Carina Randazzo was called for tripping at the 18:10 mark of the period. The Pointers would pull their goalie on the power play, giving them a 2 man advantage. The Falcon penalty killers and netminder were up to the challenge turning away multiple shots and keeping the Falcons up 3.

The third period ended with Falcons winning the O'Brien cup 4-1. The shots on the day were dead even at 26, but Angie Hall's 25 saves helped seal the victory for the Falcons.