The UW-River Falls men's hockey team won its first WIAC Commissioner's Cup, and its first conference playoff title game since 1996, with a 3-1 road victory over number one seed UW-Stevens Point thanks to a two-goal third period.

"We played a very structured game and really stuck to our game plan," said Falcon Coach Steve Freeman. "We got a very high-end effort from all of the team."

UWRF now owns three conference tournament championships (1988, 1996 and 2015). After trailing 1-0 early in the contest, the Falcons ripped off three straight goals in a terrific championship performance that is likely to put UWRF into the NCAA tournament picture.

"Winning the championship is quite an accomplishment," said Freeman. "It was great to see the guys carry the trophy. That's why they came to play hockey at UWRF."

The Falcons earned the first power play of the game just 3:17 into the first period but only managed one shot on goal from junior captain defenseman Alex Murphy.

Pointers sophomore forward Kyle Sharkey opened the scoring at 10:41 of the first period with assists to sophomore Mark Bittner and senior goaltender Brandon Jaeger (21-5-1). Sharkey's opening tally was his team-leading 16th of the season.

Welcome back, Zach Schrotenboer. Schrotenboer, who has played in only two games since Dec. 5, scored his first goal of the season at 14:10 to tie the contest at one. Schrotenboer, who scored 16 points in his freshman campaign, had only one point entering tonight's championship game; his goal was unassisted.

The second period was scoreless. UWRF outshot the Pointers 12-9 in the period. Stevens Point earned its first power play of the game with one second left in the second period. Schrotenboer led UWRF with five shots through two periods.

Dietrich doubled the lead at 15:55 of the third period with his first power play goal of his career. Dietrich's fourth goal of the season was assisted by sophomore forward Taylor Burden and sophomore forward Mitch Kontny. Burden's assist was his 13th, while Kontny upped his total to 10.

UWRF and Stevens Point finished the season 2-2 against each other, with UWRF out-scoring the Pointers 10-9. UWRF is now 67-51-8 all-time against Stevens Point.

"We had a great first period," said Falcon Coach Joe Cranston after the game. "And when Stevens Point put on some pressure we were able to play solid defensively. It was a great all-around effort."

The Falcons, now 24-3-1 overall, will find out on Monday if they receive an at large berth to the NCAA Tournament. The announcement will be made at 9 a.m., on Monday. Go to this site to watch the NCAA selection show.

UWRF dominated the first period of play and had a 15-0 advantage in shots on goal before UWSP got its first. UWSP took the game's first penalty at 16:10 and the Falcons took advantage of the situation. Alice Cranston carried the puck in from center ice and scored on a wrist shot from about 10 feet to the right of the UWSP goal. She was assisted by linemate Chloe Kinsel and defenseman Kendal Evenson. The Falcons had three shots on goal during the power play. Carly Moran had two great chances for the Falcons but she was stopped by UWSP goalie Janna Beilke-Skoug both times. The Falcons had a 22-3 advantage in shots on goal in the first 20 minutes.

UWRF added two more goals in the second period to take a 3-0 lead. Off a face off in the UWSP end, Sam Greeley scored with a shot from the left point. Paige Johnson fed her from the right point. Dani Sibley also assisted on the play. It was Greeley's third goal of the year and it came at 2:56 with the Falcons on the power play. At 10:24 Brianna Breiland scored her 11th goal of the year from right in front. She put a couple of moves on the UWSP goalie to beat her. Kinsel picked up her second assist of the game on the goal. Play was a little more even with UWRF having an 8-4 advantage in shots on goal in the stanza.

UWSP made it a 3-1 game at 11:31 of the third period when Katherine Nejedlo deflected a shot by Nicole Schaub past UWRF goalie Angie Hall.

But the Falcons added three more goals, two into an empty net, before the period was over.

Hall made 13 saves to get the win in goal and she is now 20-3-1. Beilke-Skoug stopped 34 shots. The Falcons were 2-2 on the power play and UWSP was 0-2. Both teams were called for three minor penalties. 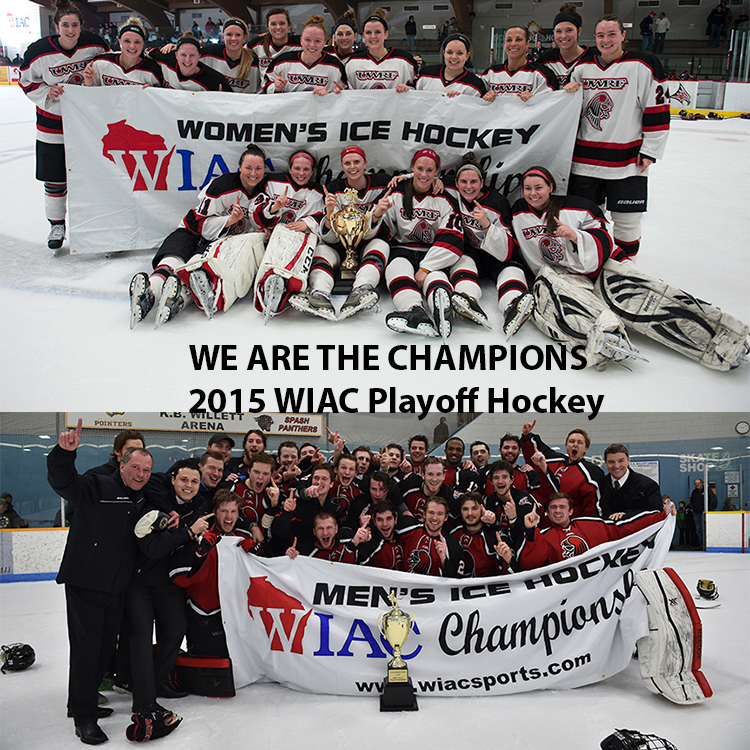