February 9, 2022 -- With a successful Advancement Office campaign, University of Wisconsin-River Falls students can soon apply for $1,000 scholarships to help cover the costs of education abroad programs endorsed by the UWRF Office of International Education. 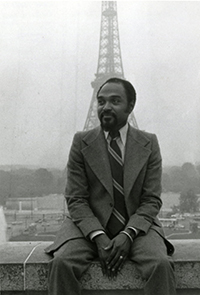 The Dr. Robert B. Bailey III Legacy Scholarship is named for UWRF’s founder of the Quarter Abroad program and the first African American faculty member.

Bailey, who many referred to as “Doc,” started at UWRF in 1957 as a sociology professor and initiated what is now known as the Semester Abroad: Europe program in 1963. As director of the Quarter Abroad program, he traveled to Europe 19 times with students.

“Any future funds raised will go into the endowment to offer more scholarships for education abroad programs,” Burrows said, noting the goal is to award five $1,000 scholarships, expected to be awarded next semester.

“This was a labor of love,” Burrows said of raising the funds. “This is a long overdue honor to thank Doc for all the contributions he did. He was a visionary. He believed in travel and the opportunity to open students’ eyes to the world and an opportunity they might not have had. He was an amazing man.”

Fluent in Dutch, French and German, Bailey did his undergraduate work at Talladega College in Alabama. He was a Fulbright Scholar in England from 1951-52 and then studied for three years at the universities of Frankfurt and Munich and then completed a doctorate in sociology at the University of Utrecht in the Netherlands.

A plaque will be placed outside the office entrance bearing Bailey’s name and recognizing donors, Burrows said.

Two of the top donors were First National Bank of River Falls and Greg and Donna Lindberg, both 1970 alums. Greg has a degree in sociology and Donna in elementary education.

“They were vital in giving the large gifts that helped kick off the fundraising,” Burrows said.

To find out more about contributing to the fund, contact Burrows at kellene.burrows@uwrf.edu or 715-425-4427.

Education abroad has had a dip since the COVID-19 pandemic, but students can find out more about studying abroad at the Education Abroad Fair from 2 to 5 p.m. on Wednesday, Feb. 23, in Rodli Hall.

Students can learn about programs in locations all over the world ranging from 10 days over Spring Break to an entire semester, said Kelsey McLean, Office of International Education interim department manager.

Whitney Baehr, a UWRF 2020 elementary education alum, took part in International Traveling Classroom her sophomore year. During the semester, students lived and studied across Europe and had the opportunity for independent travel while there.

“It was probably one of the most life-changing experiences I had,” said Baehr, who is an outdoor educator, teaching elementary to high school students about nature and the outdoors. In March, she will be teaching in the state of Washington but also has taught in New England. “I was a people pleaser and would go along with what other people wanted to do. I became more confident in myself and the thing I could do alone. That is something I never would have done before.”

Education abroad made Baehr a more globalized citizen with compassion for other cultures, she said.

Baehr also took part in a six-week study in Japan during the summer of 2019 where she taught English. One of her future goals is to teach abroad.

UWRF has a rich international education history, having reached No. 1 among the UW comprehensives for the percentage of students who studied abroad. This No. 1 ranking was achieved in 2018-19, prior to the pandemic, when nearly 18% of UWRF graduating seniors reported having had an education abroad experience.
“What is really unique on our campus is the deep level of faculty engagement,” McLean said. “Faculty teach in, and lead many of our programs, which helps ensure the international experience is integrated into students’ UWRF academic requirements.”

“Students bring their experiences back to campus,” McLean said. “They return changed. They come back to campus, and they are more open to embracing differences in our community and campus. It’s a great experience for students to see the broader world.”

The Bailey scholarship will be a great asset to students wanting to study abroad, she noted.
“We’re excited to tell students about it,” McLean said.

For more information on education abroad and the Office of International Education, contact studyabroad@uwrf.edu or 715-425-4891.