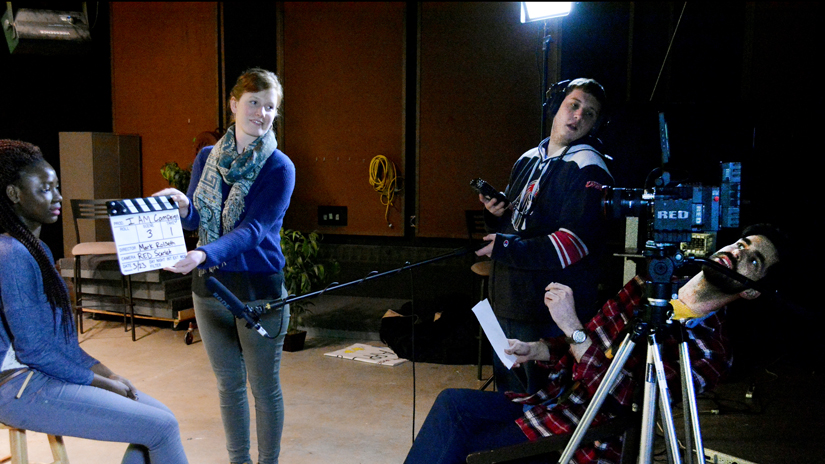 The RED camera was used to film for the "I Am" campaign at UW-River Falls. Students working with the camera are, from left to right:  Misturat Amode, Sydney Howell, Travis Kronk, and Mark Rolseth.

March 21, 2016 — Blockbuster film camera technology is available to students in the Stage in Screen Arts program at the University of Wisconsin-River Falls.

Erik Johnson, UW-River Falls assistant professor for Digital Film & Television, through a partnership with RED Digital Cinema, has obtained access to a rare Red camera for use within the Stage and Screen Arts program. The RED camera is the same technology used to shoot such Hollywood movies as "The Hobbit," "Avengers," "Robocop" and many other blockbuster films.

Standard daily rental rates for a RED camera would normally be about $1,200 per day, so the use of the camera stands as an extremely generous donation from RED Digital Cinema and one that is attracting Stage and Screen Arts students from all over the area.

According to Johnson, the relationship with RED Digital Cinema started about four years ago after he introduced himself as a Digital Film & Television professor to Eoin Breadon, a professor from the UW-River Falls Art Department. Breadon shared that his father-in-law did some work for RED Digital Cinema, and Johnson used those connections to pitch the idea of a demo for UW-River Falls students.

"To my surprise the representative from RED, Nick Watkins, proposed that we could borrow a RED ONE Mysterium X camera for 90 days," said Johnson. "The students were thrilled to gain valuable experience with a top-level camera and produced a series of projects with it."

The relationship with RED continued with Watkins visiting campus to conduct a demonstration with a new "RED Dragon" camera. Johnson then had the opportunity to visit RED Studios in 2013 in Hollywood as part of the Academy of Television Faculty Seminar. He and his students also visited the RED booth at the National Association of Broadcasters in Las Vegas.

The partnership continued as Johnson and his students were once again able to borrow the RED ONE camera  last year resulting in a series of short films that were a partnership with UWRF English Professor Joe Rein and  his scriptwriting class. The continuation of the partnership was almost derailed when Watkins was reassigned from the Midwest to South America and the policies of "loaning" RED camera equipment were thought to be no longer available to Johnson and his class. However, RED Digital Cinema surprised Johnson by referring him to another representative who not only said they could use the camera again, but offered a newer and even higher end model in the Scarlet Mysterium X.

"The RED Scarlet recently arrived and the students and I are thrilled!" said Johnson. "We have been testing it out and just recently shot a high frame rate sequence of breaking glass that will be used in an upcoming Dance Theatre performance."

Plans are for the RED Scarlet camera to be used in the upcoming collaborative "I AM" campaign, a project created by the UWRF Fashion Team. The Fashion Team is a student club promoting positive representation of diverse individuals. This semester they are working on their "I AM" campaign showcasing students appearing in photographs and videos in traditional cultural garb including messages crafted with the intent of revealing more about whom each of the students is beyond solely their appearance.

The "I AM" live event is set for Wednesday, April 13, at 7:30 p.m. in the Riverview Ballroom of the University Center. Students from three UWRF classes (SASA Senior Capstone led by Johnson, Graphic Design taught by Dan Paulus and Photography with Brett Kallusky) will pitch ideas and then create a series of materials to help support the campaign in the form of videos, photos and graphic design projects that will serve to promote the event.

"It is a rare opportunity for students to be able to use state-of-the-art technology such as the Red and Scarlet cameras," said Johnson "To the best of my knowledge we are the only university in the UW-System that has access to this kind of equipment for use by our students and that's drawing a lot of positive attention."

For more information about the Scarlet and Red cameras or the UW-River Falls Stage & Screen Arts program, email erik.johnson@uwrf.edu.