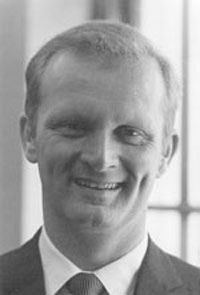 Richard D. Swensen joined the River Falls faculty in 1955 and served as chairman of the chemistry department and, from 1969 to 1988, as dean of the College of Arts and Sciences. In 1988 he returned to teaching and retired in 1993. As dean, he instituted faculty exchanges both in Europe and the Pacific Rim and brought numerous internationally recognized individuals and groups to the campus.

He was named as UWRF Distinguished Professor by the Johnson Foundation and was chosen Distinguished Teacher of the Year in 1970. He led workshops or consulted with chemistry and physics departments in Taiwan, China, Japan, Korea and Poland. He served two terms as chair of the University Faculty Council (predecessor of the Faculty Senate) and three terms on the River Falls School Board.