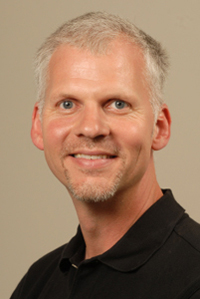 Professor of Chemistry Karl Peterson has been given the Distinguished Teacher award, the highest award for faculty at the University of Wisconsin-River Falls. The recipient of this award is selected by polling graduating seniors and recent graduates.

Peterson, a resident of Roberts, becomes the 48th recipient of the most prestigious award presented by the university to recognize excellence in fulfilling UWRF’s primary mission of undergraduate education.

Graduating seniors and recent graduates praised Peterson in their nominations.

One senior said, “Dr. Peterson brings passion and excitement to a subject many dismiss as boring. He makes the class relevant to students even if you are not a chemistry major. He is always willing to help you figure out a problem no matter how long it takes.”

Another senior noted, “He was my most influential mentor and assisted me to not only succeed but to go above what was expected of me. He uses structured lectures and fairness to teach organic chemistry. He made himself available for questions whenever he was in his office.”

Peterson is active on UWRF’s URSCA Task Force, and is the chair of the Calendar Committee. Previously he served on Faculty Senate where he was secretary, and has been on the International Programs Committee, the Ethnic Studies Committee, and the search committee for the Dean of the College of Arts and Sciences.

He has presented many research proposals including “Synthesis of Candenatenin A," and “The Design and Synthesis of a Novel Icilin Analogs from m-Amioacetophenone” as a UWRF Summer Scholars proposal.

Previously, Peterson was awarded the 2009 UWRF College of Arts and Sciences Excellence in Teaching Award. Peterson holds a bachelor's degree in chemistry from the University of Wisconsin-LaCrosse and a master's and doctorate degree from Iowa State University.