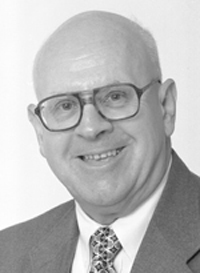 Dr. John Buschen was hired in 1966 to develop art history and humanities courses. During his tenure he emerged as the epitome of the Renaissance Man, with expertise and interests that touched on virtually all aspects of world culture and civilization, which he shared with his students and alumni.

He developed Arts and Ideas, an interdisciplinary course oriented toward UWRF's brightest students, which he team taught with now emeriti-Professor Margaret Odegard. The courses combined history, literature, philosophy, drama, art and music and led to the development of other courses in Western Art, American Art, the art of India, China, Japan and Latin America.

He did much for the University, such as pioneering a foreign film festival in collaboration with the Falls Theatre that lasted 14 years. Fluent in French and German, he lead art and history tours throughout Europe and North Africa. Buschen also found time to initiate the the Medieval Magical Banquets with dinners based on medieval recipes from the Fifteenth Century.

Buschen recalls that when he was younger, he really liked science, but his interests turned to history and art after he traveled to Europe for the first time in 1958. "I rode my bike through Europe; that experience changed my life. Later, when I returned to study in France, the interest intensified," he said.

To help make his appreciation of art more accessible to his students, Buschen created between 4,000 to 5,000 Web pages addressing art history. He designed virtual museums showing the works of women, Hispanic-American, Asian-American and gay and lesbian artists. That compendium was recently featured in an art show in which Buschen was the only electronic exhibitor.

He received a bachelor's degree from De Paul University. He also was the recipient of a prestigious Fulbright Scholarship, studying for a year in Strasbourg. He received his master's and doctorate from the University of Indiana.