A faculty member with 50 years of teaching service at UW-River Falls, and who is recognized as a pre-eminent scholar on Nazi Germany and the Russian Occupation of East Germany and Poland following World War II, has been selected as the Distinguished Teacher.

History Professor Edward Peterson is the 2004 recipient of the award, which is the highest the University can bestow. Selection is through polling of graduating seniors and recent graduates.

The selection of Peterson, who has not missed a day of teaching class since his arrival in 1954, drew accolades from students, faculty and staff.

Said Chancellor Ann Lydecker in announcing the award, "Professor Peterson has touched literally thousands of lives during his five decades of teaching. I've heard our currently enrolled students, as well as undergraduate and graduate program alumni who span the generations, speak of how Dr. Peterson was their inspiration.

"He inspired them to learn history, to develop the study skills that led to their successful completion of their degrees, to think more critically, to become better teachers, and to have a new appreciation of the United States within the world context.

"They appreciate the fact that he viewed them as individuals and took an interest in them. Dr. Peterson is truly deserving of this prestigious award."

Alumni who nominated Peterson praised the breadth of his knowledge and his commitment during the past 50 years to UWRF students.

Wrote one: "Not having Dr. Peterson as one of the "distinguished teachers" is like not listing Abe Lincoln as one of the greatest presidents. There is no more decent man or teacher at this university."

Another added, "He is an excellent professor who knows his subject, but more importantly he teaches with a vigor and excites his classes."

Added another, "Ed is a legend at UWRF. His knowledge of history is beyond compare on the campus and his dedication to the profession of education speaks for itself. He deserves this award and he's earned it in every respect of the word."

Wrote another, "Dr. Peterson is a very intelligent person. To be teaching 50 years is amazing."

Peterson, who served as chairman of the social science and history departments from 1963 to 1991, teaches a range of undergraduate and graduate courses with a particular emphasis on 20th Century European history. Among those courses are Origins of One World (Europe since 1660), German history and Hitler, WWI and WWII history and a capstone course in social sciences.

The development of his international reputation as an historian can be traced to his service in the U.S. Army at the end of World War II in Germany and his assignment for two years to Occupation Forces.

After meeting in Germany his future wife Ursula, Peterson returned to Wisconsin and earned his bachelor's, master's and doctorate at UW-Madison.

A committed researcher of German archives, including secret police records, and a prolific writer, Peterson wrote the first of his seven histories on the limitations of Hitler's totalitarian powers. His additional histories have explored such topics as Germany under American Occupation, East Germany and German resistance under Soviet Occupation, and an analytical history of World War II.

During his distinguished career, Peterson has received grants from the National Endowment for the Humanities and the Social Science Research Council. He has presented papers and lectures at conferences from Bemidji, Minn., to London, England, for such groups as the German Studies Association and the Society for the History of American Foreign Relations. He also is a three-time recipient of the Alexander von Humboldt Award presented by a German foundation for furthering scholarship in the culture.

"I think that it is possible that Ed Peterson created the mold for the phrase 'a gentleman and a scholar.' He is certainly the embodiment of that phrase. Dr. Peterson is a gentle person who speaks quietly, calmly and compassionately, but he works with great purpose and an unwavering devotion to his students and to the betterment of the University and the community of River Falls.

"His dedication is legendary, and he is also a very accomplished scholar with a prodigious list of publications, made all the more impressive by the heavy student load that he continues to carry. It is hard to imagine anyone who has worked on such an exemplary level for such a long time. He is also an extremely humble man who isn't one for self-promotion or fuss, but it is important that his work be recognized and be celebrated. His contributions are unique and lasting and are fully deserving of recognition."

In addition to his teaching and research, for the past 20 years Peterson has edited the history department alumni newsletter. As the senior faculty member, the honor also falls to Peterson to carry the University's ceremonial mace at formal events, such as commencement.

Peterson's likeness will be added to the UWRF Distinguished Teacher display in the Wyman Education Building, and he will be invited to deliver the Fall Commencement Address in December. 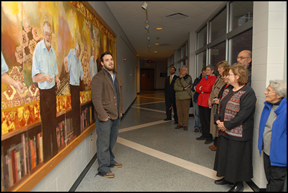 DEC. 4, 2006--Campus and community members showed up for the unveiling of a mural Nov. 28 in the west hallway of the Wyman Education Building at UW-River Falls honoring the late history Professor Ed Peterson.

The mural, composed of six different stances portraying the professor in action, was created by Garrett Bergemann, a senior fine arts major from Bloomington, Minn. While Bergemann noted that he never had taken a class from Peterson, he wanted to make an image that would inspire the campus community.

"When you're making something like that, it's hard to get all of these things together. So I thought I'd focus on what I thought was the core of the community, which is the teacher and the student and the interaction that takes place."

Bergemann chose to represent Peterson for his passion, evident in classroom photographs.