Gary Onan, professor of Animal Science at the University of Wisconsin-River Falls, has been named the 2015 Distinguished Teacher. Chosen by graduation seniors and recent graduates, the distinguished teaching recipients represent talented and caring educators-teachers who make a difference. it si the highest award bestowed on the UW-River Falls campus.

Onan is a native of Amherst and earned his degree at UW-Madison, including his Ph. D. in meat science and muscle biology. He came to UW-River Falls in 1997 and has taught at least ten different classes ranging from biometrics to animal physiology and swine production. The animal is the second largest program on campus and Onan is the academic adviser for more than 60 students at a time. In 2010 he was elected chair of the Animal and Food Science Department and was re-elected in 2013.

For 14 years Onan has served as the adviser to the Association of Women in Agriculture club on campus. He has also coached several UWRF livestock judging teams, and coordinates the UWRF academic quadrathlon team that competes each year at the midwest meeting of the American Society of Animal Science. He has supervised numerous undergraduate research projects, including some within the McNair Scholars Program and has mentored students who are acting as the manager for one of the animal enterprises on the UWRF Mann Valley Farm.

Comments from the nomination letters submitted by recent graduates included, "Without a research experience, getting into graduate school became a tougher task, so i really appreciate the fact that Dr. Onan was so willing to work on research with his already full schedule of activities!" the graduate wrote. "He goes way above and beyond his teaching appointment to make sure that students in the Animal and Food Science Department have a good experience during their college career."

"He understands that teaching is more than just teaching a subject but rather molding a student into a successful individual. Dr. Onan has personally affected my life and made me a better individual with greater integrity," another graduate wrote.

"The part I liked most about his classes was how he made them applicable to our lives. he was so good at explaining the 'why' it was important to us," a graduate wrote. 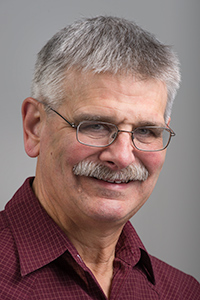