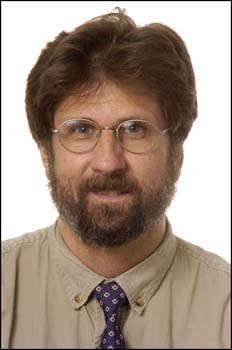 Economics professor John Walker is the recipient of the highest award bestowed on a faculty member at the University of Wisconsin-River Falls.

Walker was named the 42nd recipient of the Distinguished Teacher Award by Interim Chancellor Virgil Nylander. The award was announced April 19 at the University's all-campus awards ceremony.

Selection for this award is through polling by graduating seniors and recent alums.

Those who nominated Walker said: "John Walker could make any economics class exciting with his true enthusiasm. He was so kind and patient. I never felt afraid to ask for further explanation. He was always a friendly face on the campus."

Another student said of Walker: "John's approach to teaching forces students to prepare themselves for exams better than other professors I've had, and the experience pays off in the end despite his challenge."

A third offered: "Dr. Walker is a wealth of information and is always willing to share it. He has always been approachable and friendly, making him a joy to have as a teacher. His teaching style has helped me grow throughout my years here."

Simply put by another: "He's the man."

Nylander said in announcing the award, "My warmest congratulations to John on being selected as the recipient of the 2005 Distinguished Teacher of the Year. I applaud you for your outstanding contributions to UWRF and thank you for being a role model for our university community."

Upon receiving the award, Walker said it is an honor that highlights 15 years of hard, but enjoyable, work at UWRF because of his passion for teaching. "I like ideas and thinking about theories, and their implications in our understanding of the world," says Walker. "I like mastering ideas, understanding various aspects of neoclassical economics, Marxian theory, Adam Smith's view of economics. There is a sense of accomplishment in that and a desire to share it with people and who better than with students."

Walker's philosophy of teaching is to believe in developing each individual's potential. "I believe in the development of human potential, to try to have each student achieve his or her potential and do the best he or she can. I try to develop techniques to get students involved and interacting with the material so they will develop skills that will help them make a living and be lifelong learners."

Walker joined the faculty in 1990 after earning his doctorate at the University of Utah with specialties in political and labor economics, as well as an emphasis in the history of economic thought. Walker teaches UWRF's College of Business and Economics courses in political economic discrimination, history of economic thought, intermediate macroeconomics, statistics for business and economics, micro/macro economic principles, modern economics and ethnic studies.

Last fall, Walker took a sabbatical to conduct a survey of self-employed individuals in St. Croix County. Walker has published his findings as well as other research topics including gender differences in earnings expectations, determinants of Mexican earnings, and gender differences in compensation for earnings.

Walker has been involved in the development and implementation of the ethnic studies minor and served as the coordinator of the ethnic studies committee until 2004. He is also currently serving as the interim chair for the department of economics. Additionally, he has served on numerous University committees including the general education committee, chancellor's award for excellence committee, faculty development committee and the student affairs committee.

Walker's likeness will be added to the UWRF Distinguished Teacher display in the Wyman Education Building, and he will be invited to deliver the fall commencement address in December 2005.