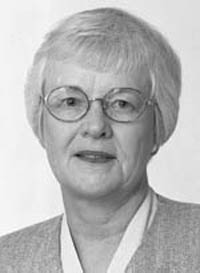 At Krey's retirement in 2002, Chancellor Ann Lydecker noted that Krey had a history at UW-River Falls that began 42 years ago as a student in 1960. "Now she is retiring as one of our most exceptional University members: DeAn holds the coveted title of being a Distinguished Teacher."

Krey earned both her bachelor's and master's degrees at UWRF, and her doctorate from the University of Minnesota. She was a teacher and professor for 37 years, spending five years in public schools and the last 32 years at UWRF. In the early years she was a teacher in Ames Lab School on campus, and then, in the early 1970s she coordinated the establishment of a field-based elementary teacher education site in Stillwater, Minn. One of her major responsibilities for the past 30 years was to lead a three-person team of professors as they offered a 12-credit pre-student teaching experience to 50 juniors each semester.

Krey taught a total of 13 different courses in Teacher Education, with her specialties in Social Studies Methods and Children's Literature. She's been widely published and she is the author of a book on "Children¹s Literature in Social Studies;" and she served as president of the Wisconsin Council for the Social Studies and is a long-time member of its executive board. In the 1980s she served as Associate Dean of the College of Education. However, she never gave up her teaching.