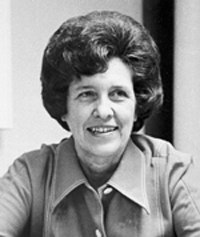 Emogene Nelson, was a pioneer in physical education and competitive sports for women. She was named UW-River Falls Distinguished Teacher in 1976, received the Distinguished Alumna Award in 1982 and became the first woman named to the Athletic Hall of Fame in 1983.

The UW-River Falls senior students and graduates of three and five years, who nominated Dr. Nelson, commented that she shows personal concern for her students. They said that she displays a total commitment to education and demonstrates high standards of professional teaching. Among other traits listed by Dr. Nelson's former students were sincerity, sensitivity and a sense of humor.

She was born in 1925 and grew up on a farm in Pierce County. She earned the rural education degree in 1944 on the River Falls campus where she was an “R” winner in the Women’s Recreation Association. She received the B.S. degree from La Crosse State Teachers College. She taught in elementary and high schools in Cornell, Durand and at Spooner, Wis., received the M.A. and Ph.D. degrees at the University of Minnesota and taught at Florida Southern University and Mankato State University before joining the faculty at River Falls in 1959.