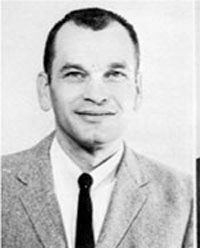 A member of the faculty at River Falls since 1963, Dr. Gray received his B.S. in Agriculture Education from Iowa State University, the M.S. and Ph.D. degrees in Animal Breeding from the University of Missouri. His graduate research involved genetic studies for low back fat thickness in swine. He published an article in the 1969 Journal of Animal Science on the subject. At River Falls he was adviser to Alpha Gamma Rho, the Animal Science Club and the Agriculture honorary fraternity, Alpha Zeta.

Proposals were made in the late 1960s to have a vet school located on campus, due to the strong agriculture department.

Dr. Richard Gray, a professor in the agriculture department, was very involved with this proposed school. After years of debate and competition, a school was awarded to UW-Madison with a satellite clinic being set up on this campus in the mid-1980s. Problems shortly came about though and the clinic was closed in 1989.