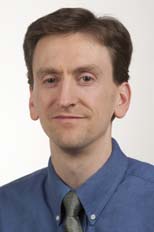 Physics Professor Lowell McCann, received the 2010 University of Wisconsin-River Falls Distinguished Teacher Award at the commencement ceremony. Graduating seniors and recent graduates nominate the Distinguished Teacher; it is the highest award that can be presented to UWRF faculty.

At UWRF, McCann has taught more than 20 different courses, both at the undergraduate and graduate level.  He predominantly teaches upper-level physics courses such as Quantum Mechanics, Electricity and Magnetism, Advanced Laboratory, and Optics.  He also supervises a large number of student research projects. In 2001, McCann and a colleague were awarded a National Science Foundation grant to modernize and expand the UWRF optics curriculum. In 2007, McCann was named the Outstanding Faculty Mentor for the McNair Scholars program. He has co-authored ten publications on a wide variety of subjects, and is a board member of the Advanced Laboratory Physics Association.