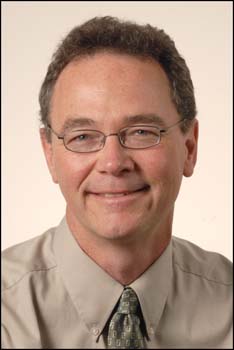 James Madsen, of River Falls, is the recipient of the UWRF Distinguished Teacher Award. He has held a number of positions prior to his arrival at UWRF in 1989. He was a postdoctoral research assistant in physics and polymer science at the University of Massachusetts-Amherst from 1987 to 1989, and an IBM graduate fellow with the physics department of Colorado School of Mines from 1985 to 1986. He also was a visiting professor at UW-Madison from 1999 to 2000. He is now a professor of physics and chair of the UWRF physics department.

A recipient of numerous National Science Foundation grants, Madsen has been involved with the IceCube project, which involves neutrino astrophysics research at the South Pole. Several students have had the opportunity to work with Madsen on this project in Antarctica and Madsen has given presentations on the research project around the globe and had his work published in many scientific journals. In 1997, Madsen helped establish the Western Wisconsin Polymer Lab on campus.

He and his family have served as a host family for numerous international students and he has been a judge with the West Central Wisconsin Regional Inventor's Fair.

A nominating student wrote: "He can take a subject matter relatively unknown to a student ... and make it interesting."

Another wrote: "Dr. Madsen was extremely enthusiastic about helping me get started with my research."