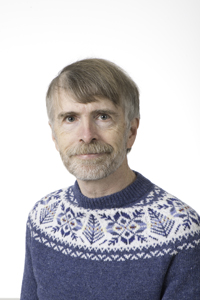 Earl Blodgett, professor of physics and a 1980 graduate of UW-River Falls, is the 2014 Distinguished Teacher.

After completing his Bachelor of Science degree in physics and mathematics at UW-River Falls, Earl studied at Washington University in St. Louis where he earned his Ph.D. in physics.  He then returned to UWRF in 1986, first as instructional academic staff, transitioning to tenure track in 1989.

Earl greatly enjoys teaching the experimental side of physics at all levels, from introductory labs through advanced laboratory. He is very interested in learning more about how students learn physics, with the goal of constantly re-examining and improving how introductory courses are taught. Earl has taught more than 25 different physics courses at UWRF, ranging from conceptual physics to senior level quantum mechanics as well as graduate courses for high school physics teachers.  He is learning how to teach in a completely new format in the recently completed Active Learning Classroom.

Beyond teaching, Earl's research interests include the Acoustics of Musical Instruments. He serves as advisor to the highly regarded UWRF chapter of the Society of Physics Students (SPS), and has served on the National SPS Council for 15 years, including two consecutive terms as the national president. He advises the UWRF chapter of Sigma Pi Sigma, the honor society for physics.  He is also a member of the American Association of Physics Teachers and the Acoustical Society of America.

For the past three years, Earl has organized the popular Science Olympiad Border Battle held at UW-River Falls. This event attracts more than 800 students annually from approximately 25 high schools in Minnesota and Wisconsin. Participating teams complete in 28 STEM (Science, Technology, Engineering and Mathematics) events, such as magnetic levitation, geologic mapping, entomology and forensics.