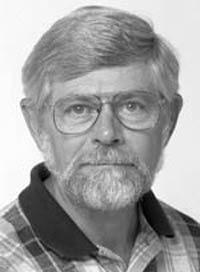 Dean Henderson, professor of food science, was named Distinguished Teacher for 1978, the most prestigious award presented by the university to recognize excellence in fulfilling UWRF's primary mission of undergraduate education. Selection for the award is through polling of graduating seniors and recent graduates..

Henderson has taught food science courses at UW-River Falls since 1968. To keep in touch with the industry, he works with processors and visits plants around the world, including Russia, Columbia and Venezuela.

Teaching has been a love of Henderson's since he was in college. He had the opportunity to teach in graduate school and from that time on was hooked. "I really like what I'm doing. I like to work with students and watch them mature and grow, and be successful when they leave. Over the years I've seen a lot of students become very successful and do lots of good things in the work world and also as humanitarians. That's reward and that's what it's all about."