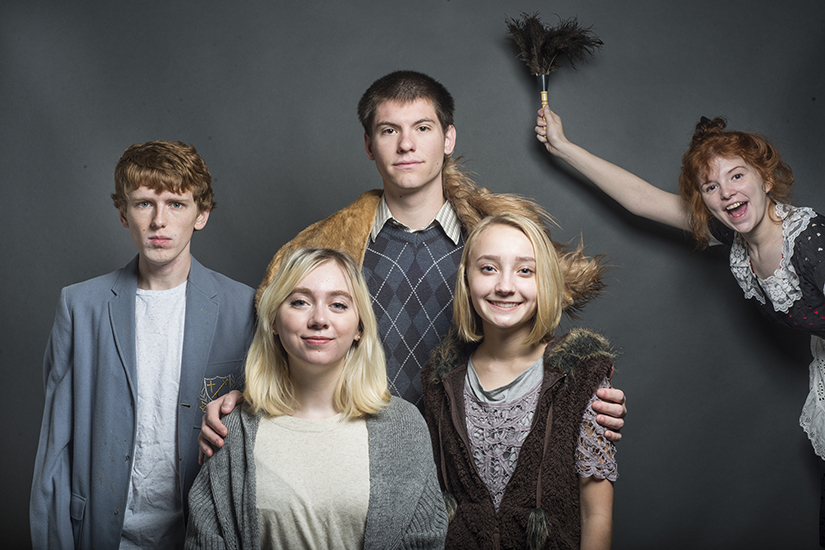 The UW-River Falls production of "The Skin of our Teeth" cast include (left to right): Nathan Brown of Wyoming, Minn., as Henry Antrobus; Jana Knudsen of Prior Lake, Minn., as Mrs. Maggie Antrobus; Corey Fern of Shakopee, Minn., as Mr. George Antrobus; Linnea Alden of North Branch, Minn., as Sabina. The show runs Oct. 26-28 and Nov. 2-4. Photo by Tori Schneider, media intern.

The University Theatre at the University of Wisconsin-River Falls will present “The Skin of Our Teeth” October 26-28 and November 2-4. All performances begin at 7:30 p.m. in the Blanche Davis Theatre in the Kleinpell Fine Arts building.

The dogs are sticking to the sidewalks! The world is on the brink of disaster, the climate is changing, floods abound, shady politicians pander to mob mentality, and war threatens to destroy civil society. The plot of Thornton Wilder’s Pulitzer Prize winning 1942 play, “The Skin of Our Teeth,” could have been snatched from today’s headlines.

This very relevant comic allegory tells the story of an ordinary American family who has survived all of human history. Dad has just invented the wheel, Mom has invented fried food, and their pet Mammoth and Dinosaur beg to be let in out of the cold. The unique theatrical style of the play creates a hilarious and poignant portrait of the human spirit and our ability to survive it all by the skin of our teeth.