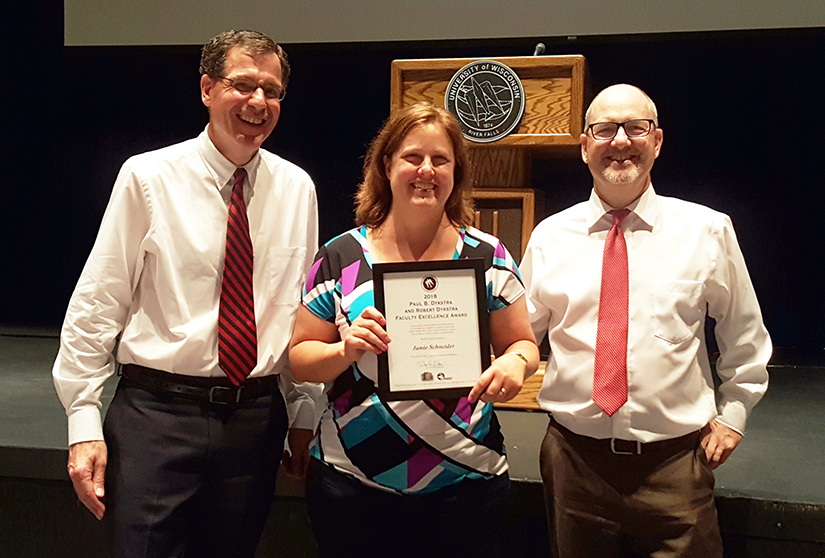 September 21, 2018 – Chemistry Professor Jamie Schneider has been named the recipient of the 2018 Paul B. and Robert Dykstra Faculty Excellence Award at the University of Wisconsin-River Falls.

“Dr. Schneider is an outstanding colleague, exceptional educator and award-winning scholar. Her passion for teaching is amazing and much appreciated by both students (who award her superb student evaluations) and peers (who praise her intellect, engaging teaching style and her use of cutting-edge pedagogy),” wrote Tricia Davis, associate dean of the College of Arts and Sciences, in her nomination letter.

Schneider, of River Falls, joined the UW-River Falls faculty in 2008 and her current scholarship focuses on chemistry education. Her research has been awarded multiple grants through the National Science Foundation (NSF), including a current grant funded through the NSF’s Improving Undergraduate STEM Education (IUSE) program for $498,483. The grant supports Schneider’s research project, "Optimizing Testing Feedback for Improved Student Learning," that is aimed at generating evidence about the role of testing feedback to promote and support learning in general chemistry through four related sets of studies. This project aims to utilize and expand on knowledge gained from an NSF Transforming Undergraduate Education in Science (TUES) grant awarded in 2012.

“Dr. Schneider’s scholarly efforts are equally impressive and are the main reason for my support for her nomination. Jamie is a prolific researcher with numerous publications in several content areas including effective classroom feedback and magnetic 3D physical modeling,” Davis further explained in her nomination letter. “She is a nationally recognized expert on Process Oriented Guided Inquiry Learning (POGIL) and has made over 20 professional presentations on the topic.”

“Jamie has formed collaborative relationships with faculty from over a dozen institutions and through these efforts has brought UWRF positive recognition concerning the quality of scholarship occurring on campus,” wrote Davis.

Fellow chemistry Professor Michael Kahlow praised Schneider’s work in his nomination letter, writing, “Her [Schneider’s] work makes everyone else at UWRF better. Her scholarship has been transformative for our department, our college and our university.”

Schneider has served on five NSF grants in various roles, mentored a dozen undergraduate research students, and co-authored multiple publications. She has also presented her work at numerous state and national conferences, is a STEM faculty development mentor at UWRF and has served on multiple committees across campus. She is a member of the American Chemical Society and National Science Teachers Association.

She has previously been awarded the Excellence in Service Award and Excellence in Research Scholarship and Creative Activities Award, both from the UWRF College of Arts and Sciences, as well as the UWRF Keith Wurtz Award for Teaching Excellence and the UWRF Compass Award for outstanding advising and support for first year students.

For more information about the Dykstra Award, visit https://www.uwrf.edu/FacultyDevelopment/Dykstra-Faculty-Excellence-Award.cfm or email wes.chapin@uwrf.edu.