February 23, 2022 - University of Wisconsin-River Falls 2020 commissioned composer Nirmala Rajasekar and her daughter, Shruthi Rajasekar, will have their music performed on Thursday, March 3, at 7:30 p.m. in Abbott Concert Hall in the Kleinpell Fine Arts building.

The event is free and open to all. Masks are required in university buildings.

The 2020 Commissioned Composers Project concert is being premiered late due to COVID-19 concerns.

The chamber music performance will be comprised of students from the UWRF Symphony Band. There also will be world drumming with director Pat O'Keefe, UWRF lecturer of music, and Nirmala as guest artist. 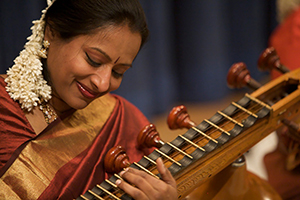 Nirmala is one of the premier Saraswathi veena players in the world, a vocalist, composer and educator. A celebrated composer, Nirmala has written traditional and collaborative music for orchestras, choruses, theater and chamber ensembles in Indian and Western classical music. She is the university’s first Indian-women composers and UWRF’s first-ever composers from a traditional art form to be the commissioned composer.

She is a passionate educator who believes in passing on the art to the next generation with sincerity and dedication. She established the Naadha Rasa Center for Music and has served as its artistic director for the past 27 years. 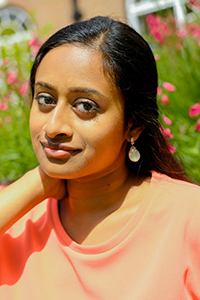 Named by The Guardian UK as a composer "who will enrich your life," Shruthi is an Indian American musician exploring identity, community, and joy. Shruthi’s music draws from her training in the Carnatic (South Indian classical) and Western classical idioms. Composition honors include the KHORIKOS ORTUS International Award and the Global Women in Music Award from the United Nations & Donne in Musica. As a soprano and Carnatic vocalist, Shruthi has been recognized by the National Association of Teachers of Singing (NATS) and the internationally televised Carnatic Music Idol USA. A graduate of Princeton University, Shruthi was awarded a Marshall Scholarship in the UK for graduate studies in composition and ethnomusicology.

UWRF’s Commissioned Composers Project is the longest-running continuous composers project at a university in the United States.

“A world premiere of music celebrates the creative and is a gift,” said Music Professor Kris Tjornehoj.

The Commissioned Composer Project was started in 1967 by Professor Emeritus Conrad De Jong. De Jong's intention from the beginning was to ensure that contemporary trends in American music would become part of the repertoire of UW-River Falls music students.