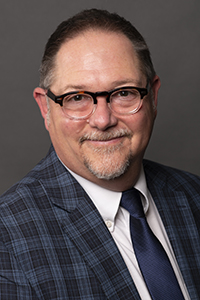 Dean, College of Arts and Sciences

Dr. Dean Yohnk joined the UW-River Falls community in July of 2018 as Dean of the College of Arts and Sciences and Professor of Stage and Screen Arts.

Prior to arriving at UW-River Falls, Dean Yohnk served as the Dean of Academic Affairs and Graduate Studies and a tenured professor of Communicating Arts and Theatre at UW-Superior (2016-18) and as the Dean/CEO at UW-Barron County (2014-16). He also served as a tenured professor of theatre, department chair, and Dean of Arts and Sciences at UW-Parkside in Kenosha (WI) from 2001-2014. Dr. Yohnk began his career in higher education as a professor of Theatre Arts and department chair at Viterbo University, his undergraduate alma mater, in La Crosse (WI) where he served from 1992-2001.

Promoting successful teaching, learning, and academic excellence is at the core of Dr. Yohnk’s professional vision and mission. At the collegiate level he has taught courses in multicultural theater in America, gender and sexuality on stage and screen, directing, playwriting, theatre history, dramatic literature, performance, and arts management. He was certified by the Wisconsin Department of Public Instruction (DPI) in the areas of theatre, English, and language arts and has continued to teach courses and workshops at the PK-12 level throughout his career.

Artistically, Dr. Yohnk has directed and designed over 100 professional, community theatre, and university theatre productions in the past 30 years. He has been active as a professional theatre director, actor, scenic designer, and educator and has worked at such nationally-known theatres as The Milwaukee Repertory Theatre, The Guthrie Theatre (Minneapolis), The Huron Playhouse (Ohio), and The Peninsula Players Theatre (Door County, Wisconsin). Dean’s favorite acting role is Benjamin Franklin in the musical 1776, a role which he has played in two professional productions.

Under Dr. Yohnk’s leadership, the UW-Parkside Theatre Arts Department was awarded the coveted UW System Board of Regents Teaching Excellence Award in 2005. During this time the Theatre Arts Department also received more than 50 Awards of Merit from the Kennedy Center American College Theatre Festival (KCACTF) for production excellence, and Yohnk was awarded the KCACTF Gold Medallion Award in 2010 in recognition of his achievements in promoting excellence in collegiate theatre in America.

Yohnk also served for more than a decade on the regional and national executive committees of the Kennedy Center's American College Theatre Festival. He has also been an active member of the Association for Theatre in Higher Education (ATHE), Arts Wisconsin, and is also the Past President of the Alliance for Wisconsin Theatre Education and the Wisconsin Council of Theatre Chairs. He has been active in the UW System Liberal Arts Dean’s Association since 2010. Yohnk has been an active member of Rotary International for many years.